Every parent has experienced the stench of stinky diapers wafting through the hall. Or even worse, your baby’s nursery smells of diaper blowouts rather than sweet roses. Sometimes the diaper smell seems to follow you around the house.

Until you potty train your little one, the diapers will remain.

Thankfully, there’s a better solution than tossing dirty diapers in the kitchen trash. Diaper pails are a great way to keep the dirty diaper smell at bay.

A diaper pail is a special trash can that has a lid to keep in smells. Most have built-in deodorizers and some even have locking mechanisms to keep little hands out. You will also find diaper pails that use regular kitchen trash bags and others that have special diaper pail bags.

The is a variety of diaper pails on the market and it can be hard to decide which one is right for you and your baby. Let us help make your decision easy.

If you’re looking for a good diaper pail to help with odor control, look no further! Our list of the 7 best diaper pails of 2023 will help you choose. 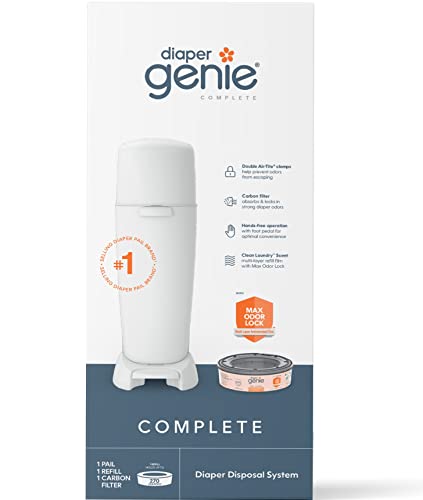 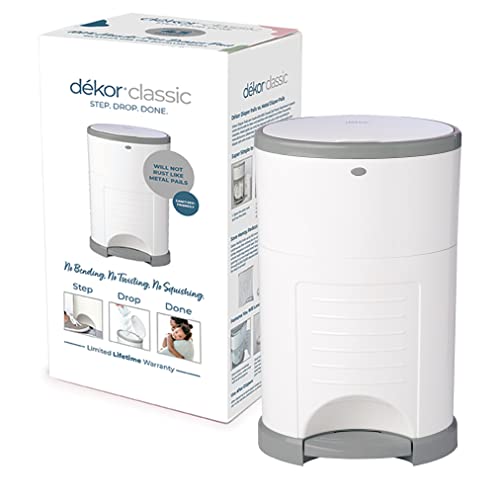 Our pick for the best diaper pail is the Playtex Diaper Genie Complete. Here’s why:

Quality. Playtex has been around for a while and their Diaper Genie is known for its high performance and quality. They are a brand to trust.

Odor Control. With all of the odor locking features, it’s no wonder it performs so well.

Ease of Use. Changing diapers can be messy. A hands-free diaper pail just makes sense.

With thousands of reviews and awards to their name, we think you’re going to love this one. This tops our list for the best diaper pails of 2023. 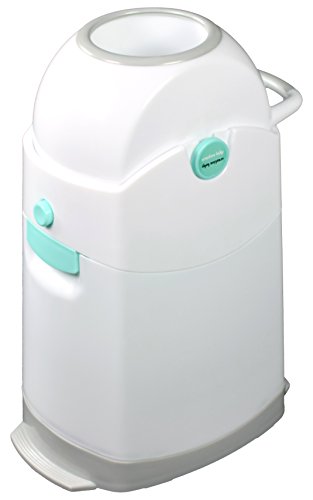 Many parents want to avoid spending extra money on custom trash bags for diaper pails. But this often leads to diaper pails that fail in odor control. The Creative Baby Tidy Diaper Pail is an exception to this case.

This diaper pail uses regular trash bags to hold the dirty diapers. You’ll never have to buy specialty bags or worry about not having the right bags on hand. A regular kitchen trash bag is what most parents use in this diaper pail.

This pail pushes the diapers into the bag with a piston system. To dispose of it, you drop your baby’s diaper in the hole and flip the lid using the handle. This allows the piston to flip over and lower, pushing the diaper into the trap door to the trash.

As far as odors go, this diaper pail keeps in most unwanted smells. Most parents noted that they couldn’t detect any diaper stink coming from this diaper pail. Even when you flip the handle, the trap door manages to keep the odors contained.

One area this pail doesn’t perform well in is disposing of wipes. The design of this pail often causes wipes to get stuck in the piston. Regular diapers with wipes tucked inside don’t have an issue though.

So they created the Dekor Classic Diaper Pail. A diaper pail with a continuous trash liner that you cut to length with each time you empty the pail. This results in less waste and a cleaner pail.

In addition, their diaper pail converts into a regular trash can when diaper days are behind you!

Any time you empty the pail, you cut the bag on the child-safe, attached bag cutter. Then you twist and tie the bag to close and dispose of it. The rest of the liner just pulls down and ties up to create the next bag.

Another fantastic feature is the hands-free operation. To dispose of a dirty diaper, step on the foot pedal and toss the diaper on the trap door. The opening of this hands-free diaper pail is also wider than most.

The opening does a decent job of closing quickly and trapping in odors. However, some parents noted that the trash needs to be changed often to keep the smell from becoming too strong.

Dekor’s emphasis on saving bags and their reusable trash can design make this the best diaper pail for environmentally conscious parents.

If you surveyed parents and daycares all over the US regarding which diaper pail they use, you’d likely hear this name more than any other. The Playtex Diaper Genie Complete is the number 1 selling diaper pail brand.

When it comes to odor control, Diaper Genie has mastered it. The air-tight clamps, 7-layer bag, and carbon filter all power the ability of the Diaper Genie to absorb odors. Plus, the continuous liner allows you to cut the bag and empty the trash whenever needed.

This diaper pail is also hands-free. Simply step on the foot pedal and toss the diaper into the hole. No bending over is necessary for this hands-free diaper pail.

The pail, scent refill, and 7-layer liner are also designed with antimicrobial materials. This means germs won’t spread, even if your toddler decides to play in the Diaper Genie. The opaque bag also makes dirty diapers less of an eye-sore when taking out the trash.

Some parents mentioned that this newer model of the Playtex Diaper Genie Complete doesn’t hold as many diapers as the older model. This means you’ll have to take out the trash often. However, this is a small price to pay for a diaper pail that absorbs odors well.

The parent reviews for this time-tested brand make this one of the best diaper pails on the market. 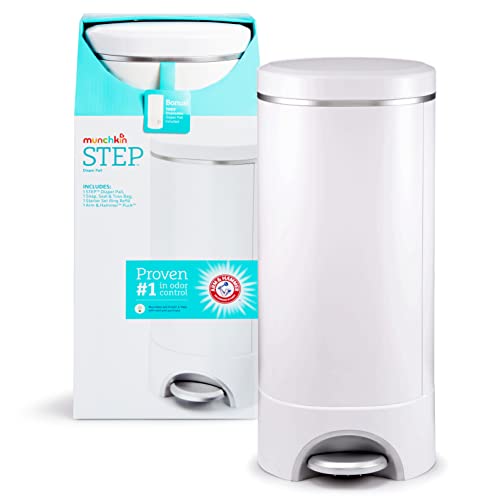 Have you ever had an odor problem in your home? If so, you’ve probably grabbed a container of everyone’s favorite odor absorber—baking soda. Wouldn’t it be great if there was a diaper pail that used baking soda too?

Let us introduce you to the Munchkin Step Diaper Pail. This diaper pail has its own baking soda air freshener attached to the lid. This ensures freshness with each toss of a soiled diaper.

On top of the deodorizer, this diaper disposal system also twists and seals the bag shut after every dirty diaper. The scented refill bags are continuous and can be cut off and tied each time you empty the trash bag. If preferred, this diaper pail also works with snap, seal, and toss bags.

Parents love the hands-free capability the Munchkin Step Diaper Pail offers. The foot pedal releases the lid so you don’t have to touch it. It even has a child lock to keep little ones from playing in the diaper pail.

One thing to note is that you will have to push the diaper down into the plastic liner trash bag. However, this might not bother all parents, as you’ll likely be washing your hands anyways.

The use of powerful baking soda and scented bags makes this one of the best diaper pails for odor control.

Some parents just don’t want to spend a lot of money on something that’s going to hold soiled diapers. We get it! This is why we picked the Safety 1st Easy Saver for the best diaper pail for parents on a budget.

You won’t get a lot of extra features with this pail. There is no foot pedal and it’s not a hands-free diaper pail. You also won’t have fancy refill bags or rubber seals. However, for the price, it’s worth a look.

This diaper pail opens like most regular trash cans. You can open the entire lid or just the small hole at the top. Insert the soiled diaper and close shut.

Since this pail uses regular disposal bags, you won’t need to shove the diaper through a plastic liner. The lid for the small hole contains a deodorizing disk. This helps to absorb odors and is what makes it a solid choice despite its limited features.

Most parents were fairly pleased with the odor control for the price. However, the small hole at the top does become a little too tight for diapers past the newborn stage. You’ll have to open the whole lid to put diapers in at that point. 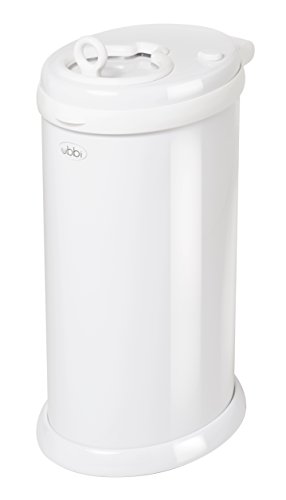 Most of the diaper pails we’ve covered have been plastic pails. The Ubbi Diaper Pail changes the trend with an all-steel base.

With multiple awards to its name, this pail by Ubbi is built to last. Their steel design is eco-friendly as well as sturdy.

The odor control on this diaper pail is solid. That’s thanks to rubber seals and the sliding lid that minimizes airflow when opening. This is good news for parents who don’t want to get a blast of diaper-air each time you open it.

If you have more than one child in the house, you’ll be thankful for the child lock feature. This keeps little hands from playing in the diaper pail.

Another great feature about this diaper pail is the fact that it uses regular disposal bags. So there’s no need to buy expensive custom bags. The bag fits right over the circle lever in the diaper pail, holding it in place.

Most parents are pleased with the number of diapers this diaper pail holds. However, the seal on this diaper pail is not as strong as other brands. You’ll probably want to change the bag often.

Proven by reviews, this award-winning, steel pail is one of the best on the market. 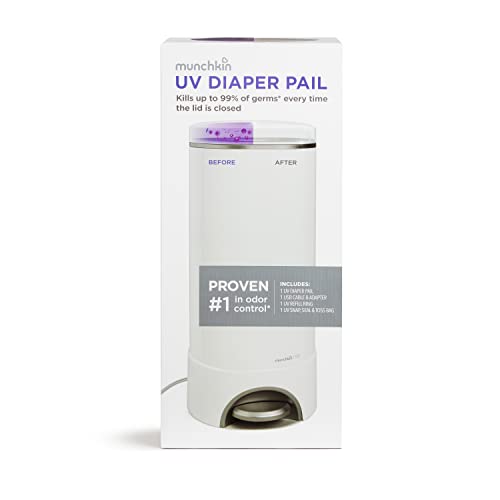 We know—diaper pails and luxury usually don’t go together. But you’ve got to see the features on this Munchkin UV Diaper Pail.

This diaper pail has all of the great features of the Munchkin Step Diaper Pail. The foot pedal releases the lid so you can toss the diaper into the bag. The bag also twists and seals each time you shut the lid.

The reason behind this technology is two-fold. First, you won’t have to worry about any germs lingering in your trash can. Second, the UV lights kill off odor-causing bacteria.

The parents who have this trash can love its performance. The odors are minimal to none and its sturdy design is made to last.

One thing to note is that this needs to be plugged in to sanitize. So be sure you have a spot in your baby’s nursery for the plug.

Diaper trash cans often come with disposable bag options. There are other accessories however that make diaper changing a breeze.

What should you look for in a diaper pail?

Here are the main things to keep in mind when shopping for a diaper pail:

How often should you change the diaper pail?

There’s no exact answer to this question, but most parents say they change the bag once it’s about half full. This helps to prevent any odors from escaping. The more often you change the bag, the less likely the diaper pail is to smell bad.

Looking for the perfect beach bag for your next family vacation? The best beach bags for moms are all right here!

The fully customizable SAMi-3 seizure monitor can alert you when your child has a seizure while also minimizing the number of false alarms you receive.