The Bumbo Baby Seat: Helping your baby join in

If your child is blind or visually impaired, you will already know how difficult and frightening it is for them to “let go of the floor” and sit upright.

Bumbo Baby Seat can make a very big difference to your child’s perception of his world by allowing him to sit upright and comfortably in a specially-made child seat which surrounds him with stability and security.

The Bumbo allows a child to feel the sensations of sitting up without being held and frees up both of baby’s hands for interaction and play. It also means you can sit opposite your child while he is upright for more natural give-and-take interactions and the seat also gives him the freedom to move his head and exercise his neck and back muscles when tracking sounds or lights. 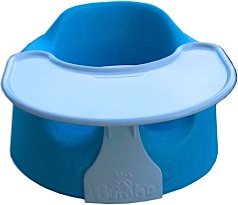 My seriously visually impaired daughter was unable to sit up unaided until she was about ten months old, later than normally sighted children, and the Bumbo was a big help, giving her the ability to sit up socially before she was able to do this herself.

The seat is comfortable, flexible, and easily cleaned, and now has a tray attachment for food or toys to stay within handy reach. The people at Bumbo are currently making a larger size to accommodate bigger children who have special needs.

The Bumbo seat is suitable for babies once they can support their heads and remains useful until they can get out of it on their own, usually about the fourteen months stage.

You can purchase the bumbo through Amazon.

Receiving a gross motor delay diagnosis may seem overwhelming at first. However, treatments can help your child catch up to their peers.

Crawling is an exciting milestone, but did you know there are different baby crawling types that could be completely normal for your infant?

The Crawligator is a safe and fun way to promote tummy time by supporting crawling mobility and helping develop gross motor skills.