I have three girls. Elyse and Tasmin are twins and almost three years old! Their sister, Shelby, is almost two and diagnosed with CHARGE Syndrome. As Elyse and Tamsin get ready to turn three one thing I’ve been thinking a lot is that I’ll no longer be able to say I have three kids under three. Then I start thinking about how I wanted to have back-to-back pregnancies so the girls could be like triplets once they got a little older. I dreamed about them sharing clothes, sleeping in the same room, playing together, and just being inseparable.

The reality is less like having a set of triplets and more like having a set of three year old identical girls and an infant even though they’re only fourteen months apart. This reality is partly caused by Shelby’s CHARGE Syndrome, hospitalizations, and other medical problems. It is also partly caused by Elyse and Tamsin’s (oh how do I say this?) lack of interest in Shelby.

Recently (like the past six months) Elyse and Tamsin are showing more interest in Shelby, but still aren’t including her like a sibling or interacting with her like they do each other. (Of course, they don’t really play with their peers either; I don’t know if this is a twin thing or what.) As mum I try to involve them with Shelby’s care, therapies, and play, here are some of the things we do:

What works for you? I’d love to learn other ways to encourage sisterly love and interaction! 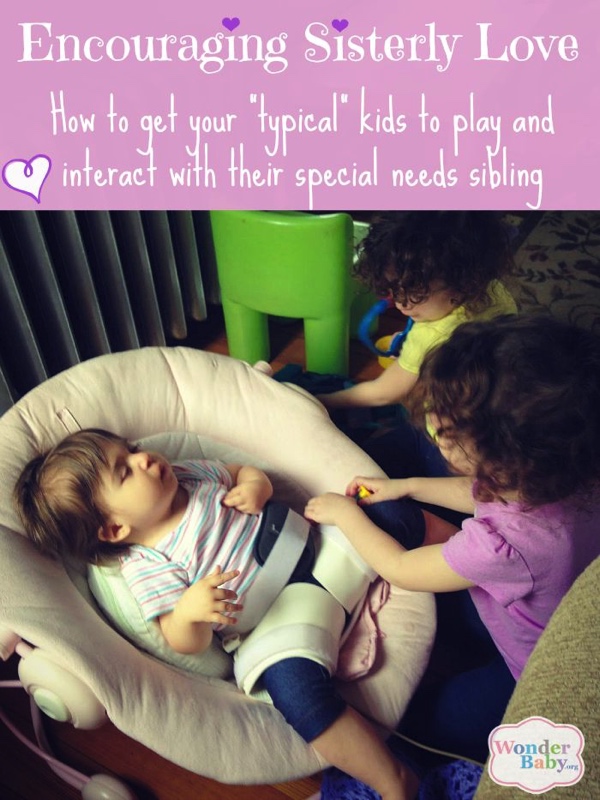