The other day I was scrolling through a Facebook support group for parents of kids who are visually impaired and saw a mother had posted about how her daughter’s white cane was taken by the teacher whenever she entered the classroom. This mother wasn’t asking for advice (she was not happy about it and seemed to know exactly what she was going to say to the teacher). She was really just venting and probably looking for affirmation of her anger.

I kept scrolling and was surprised by the annoyance, disgust and exasperation from other group members… directed at the mother! I don’t want to get into the argument here about whether or not a teacher should hold on to a cane during class time (which apparently is a highly controversial topic), but think about the response the group had to this mother, who I think we can all agree was just looking out for the well being of her daughter.

Here was a mother facing what she felt was an injustice. She came to a support group looking for, well, support, and instead was attacked by other group members who she most likely had never met in person and who probably didn’t really understand her or her daughter’s story. The back and forth in the comments got heated very quickly with lots of name calling and finger pointing. And all I could think was, “Why are we being so mean?”

I’ve seen this happen again and again in both online special needs support groups and even in real life in-person groups. Maybe because we are regularly discussing high-stakes issues with life altering consequences or maybe because we are revealing our personal lives and exposing our innermost thoughts to people who we often barely know, emotions seem to always be on a simmer, ready to boil over at any moment. And that can get really ugly really fast.

The thing is, we can’t do this alone. Raising a child with disabilities is hard and we need each other to make it through the bad times. We also need to have someone to share the successes with who will really understand why the success is so amazing. You hear it all the time (I say it on this website all the time!) you need to find a support network. Whether that is through your school or local special education committee or in an online support group, you need to find people who can support you and give you advice when you need it.

So how can we make these groups work without having them spiral into comment shaming and yelling matches?

I asked my online friends for some advice (and we were actually all very nice to each other!) about how to make support groups work. Here’s what they had to say…

A good support group can start on paper with written guidelines outlining what is and what is not acceptable behavior in the group. It’s a lot easier to tell someone they are out of bounds if there is something in writing to refer back to. One mom says, “It may sound officious, but it ends up making everyone more relaxed and comfortable to know ahead of time that there are boundaries and that they will be respected and enforced.”

But who will enforce those rules? Having an admin who is present and evident throughout the group can really help to keep people engaged and following the rules. For an in-person support group this may be a licensed social worker, but in a Facebook group it just needs to be someone who is active and willing to take the time to moderate group interactions. One mom says, “I have found that being really explicit in the rules for a group and finding an admin who really has time to monitor and enforce the rules has a positive outcome on the group…. It sounds ridiculous to have to remind people to be respectful and kind but unfortunately it’s needed.”

You can’t walk in someone else’s shoes so it’s always productive to remind ourselves that someone else may have a different opinion because their life is on a different track. Try to refrain from judging. Go ahead and judge quietly in your head all you want, but let’s keep the judgements to ourselves. One place where I see this come up a lot is in the topic of searching for a “cure” or “treatment” for a child’s disability. Some families feel that searching for treatment means you aren’t happy with your child the way they are, other families feel that being complacent with your child’s condition is irresponsible. And in either case the judgement is usually based on incomplete knowledge, not knowing exactly what the family is going through or what the child’s condition is.

4. Remember that not all stories are the same

Just because another child has the same diagnosis as yours doesn’t mean they live the same life or even present with similar issues. It’s important to remember that each kid is different, even when those kids are in the same “genetic family” or have the same diagnosis on paper. It can be nerve-racking to have other parents tell you that your child “should” be having seizures when he isn’t or that he “shouldn’t” be able to walk when he can. Are the doctors wrong? Are you missing something? Let each story run its own course.

5. And most important I think, remember that sometimes there is no good answer

One mom put it this way: “I think one problem is that people want to help solve each other’s problems. Being supportive doesn’t mean having all the answers.” And that’s true! Sometimes all we want is for someone to listen or to have the opportunity to vent to a group that will understand. Unsolicited advice can come at the most inopportune times and cause tensions to rise in a group. Remember these words from another mom: “I think sometimes I just want to talk and say how I’m feeling. Hearing other people’s experience and what worked for their child is great, but having a parent tell you what you should do because it worked for their kid doesn’t work for me.” 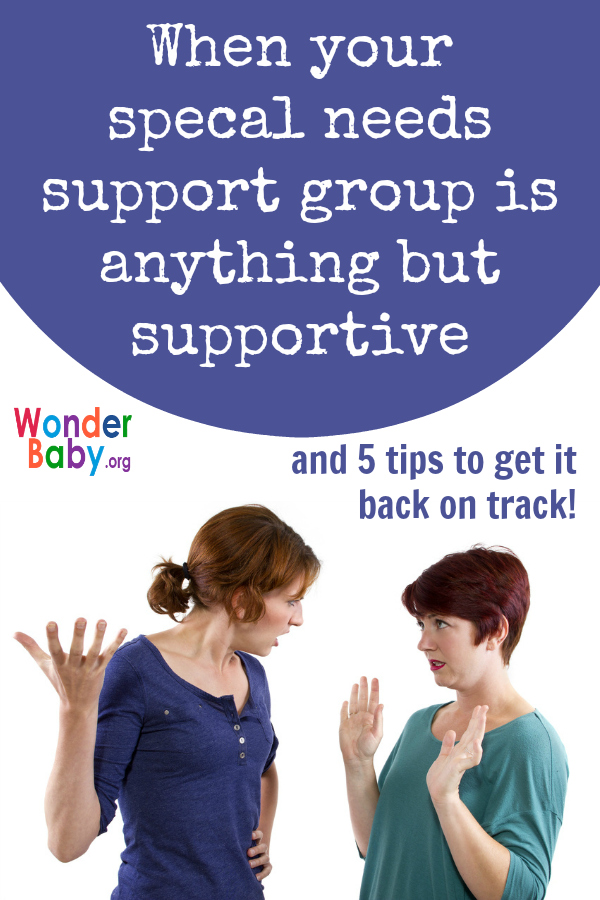 Reader’s Digest Partners for Sight is dedicated to fostering the independence of people who are blind and visually impaired.

The Council of Citizens with Low Vision International (CCLVI) is dedicated to providing information and tips to help you live well with vision loss.