What Are “Baby Leaps” and Are They Real?

Every parent has experienced it at some point. Your baby seems happy; you’ve finally worked out some routines for sleeping and eating, and you’ve overcome some challenges. Then, just when you think you’re getting the hang of this parenting thing, your baby won’t stop crying.

They’re fussy. They’re shy now when they weren’t before. They burst into tears if you leave the room for a second. That hard-won sleep routine is out the window, and you’re up all night again. What’s going on?

According to The Wonder Weeks, it sounds like your baby is actually in the fussy phase before a big developmental change, known as a baby leap. Your baby’s brain is working hard, and your baby is about to show you a whole new level of mental ability. So, what are “baby leaps,” and are they real? Let’s look into the popular parenting theory to find out more.

The Facts About Baby Leaps

“Baby leaps” refer to the developmental milestones, specifically mental leaps, that most babies reach around the same time in their first 20 months.

These leaps were studied and explained in the work of two Dutch child development experts, Dr. Frans X. Plooij and his wife Dr. Hetty van de Rijt. They are the authors of popular parenting manual, The Wonder Weeks, which breaks baby leaps down into ten different stages. 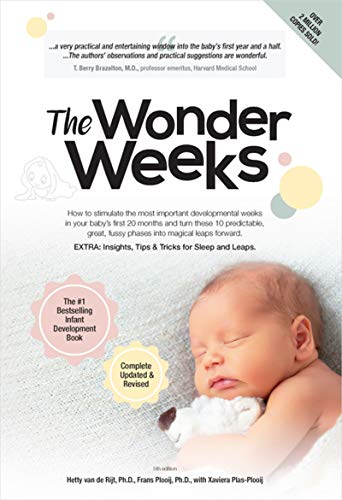 Dr. Plooij and Dr. van de Rijt proposed that when a baby reaches a mental leap, they experience a change in their ability and perception. The change can come on suddenly and be overwhelming. Most babies respond to this through an intense period of fussiness which may include mood swings, changes in appetite, sleep regression, or other behavioral shifts.

This theory helps parents understand and survive difficult periods they may go through with their baby. However, as a baby’s temperament temporarily changes during these times, they are also rapidly learning new skills. As a result, many parents will observe significant changes in their baby’s mental and physical development during each new developmental leap.

When Do Babies Go Through These Leaps?

The developmental leaps tend to happen at around the same ages for most babies.

How to Tell if Your Baby Is Going Through a Leap

According to The Wonder Weeks, the three Cs—clinginess, crankiness, and crying—often accompany babies’ mental leaps.

These periods of increased fussiness precede each leap and can last from one to six weeks in some transitions. Your child may cry more, have trouble falling asleep, have changes in appetite, and increased tantrums. In addition, your child may be more shy than usual, clingy, and have difficulty separating from you.

The theory behind Wonder Weeks is that the changes to your baby’s brain and mental development are startling and overwhelming for your little one.

Their nervous system makes new connections as they learn about the world and rapidly discover new abilities and skills. As a result, your baby’s fussiness increases for intense periods between developmental leaps as your baby assimilates new information.

Your baby is doing the hard work of achieving each mental leap. It’s not surprising that they need reassurance during the transition between each new phase. Luckily, these intense periods of fussiness will end as your baby reaches each new stage and builds on what they learned from the last mental leap.

How Long Do Baby Leaps Last?

According to the Wonder Weeks experts, baby leaps can last from one to six or seven weeks.

The fussy, clingy phase that precedes a mental leap can also last anywhere from one week to six weeks, depending on your baby’s age and the leap they’re approaching. The Wonder Weeks creators now have an app that accompanies their book to help parents keep track of their babies’ behavior week to week.

However, it’s important to remember that the Wonder Weeks theory is based on observations of when most babies tend to reach these markers. Not every baby will experience every leap the same way for the same amount of time.

Tips to Make the Most of Baby Leaps

Making the most out of baby leaps is not about accelerating your baby’s mental growth or getting them to acquire new skills more quickly.

The idea is that observing and predicting when these leaps will happen will help you understand why your baby is unsettled so that you can support them better.

A Wonder Weeks chart will help you keep track of your baby’s fussy periods to predict when a baby leap may be approaching. The chart calculates your baby’s age from their due date rather than their date of birth. There is also a Wonder Weeks app to easily track your baby’s mental leaps.

Save sleep training for non-fussy periods.

Parents who understand Wonder Weeks know that trying to sleep train a baby during a period of fussiness when clinginess, crankiness, and crying have intensified is not a good idea. If you want to implement new routines in your baby’s life, wait for a period of calm, known as a “sunny week,” in the developmental phase.

Periods between leaps are often characterized by sleep disturbance and mood swings. Therefore, it’s best to wait for these to pass and for your baby to be relatively settled before trying to sleep train for naps or institute a new bedtime routine.

What is the difference between baby leaps and growth spurts?

A baby leap is a mental change in a baby’s development that is sudden and makes the world look different to them. The baby’s nervous system is changing. As a result, their perception and understanding of the world around them suddenly expand, which can be startling.

Although this change can also accompany new physical skills and growth, a baby leap refers primarily to mental changes.

Growth spurts refer to rapid physical changes that a baby or child may undergo. These, too, can be accompanied by trouble with sleep and increased fussiness.

Do all babies go through leaps?

According to The Wonder Weeks authors, all babies reach mental leaps around the same time. They made this claim based on their observations and study of hundreds of infants.

However, while the authors claim that all babies go through the same mental leaps, critics point out that the theory doesn’t consider factors that may affect an individual baby’s development.

Not all babies are the same. Cognitive developmental delay, premature birth, genetic factors, health issues, medical conditions, or other disabilities can all impact the pace at which a baby achieves mental milestones.

What if my baby doesn’t reach a leap on schedule?

As with any parenting theory, you may find that Wonder Weeks suits your baby and really helps you. Or, you might find that your child’s behavior doesn’t correspond to the ten baby leaps. Or, like many parents, you may fall somewhere in the middle.

The theory of baby leaps may be most helpful to you if used as a general guide. Instead of worrying about whether your baby hits a leap on schedule, talk with a healthcare professional if you’re concerned that your child has not reached a milestone as expected.

One of the criticisms of Wonder Weeks is that predicting a baby’s development schedule is unrealistic for most babies and their families. However, if you notice that your baby isn’t acquiring new skills the way you thought they would, you should consult with a pediatrician.

Is your child struggling to play with toys and use small objects? Read on to learn about fine motor activities for your infant or toddler!

Learn about social-emotional activities that will help your toddler develop the social and emotional skills needed to thrive in early childhood and beyond.

Crossing the Midline Activities & Exercises for Your Child

The ability to cross our hands or feet over the midline of our bodies is important for many skills. Learn activities to help your child cross the midline with ease!