I’m Raising My Special Needs Child with Dignity – Are You?

I’ve written before about the amazing workshops provided by one of my state’s Family Support Service agencies, Massachusetts Families Organizing For Change. All the workshops I’ve attended were helpful, but the best part has been meeting other parents, many of whom have older kids or young adults with special needs and have more wisdom than I do.

Much of what these parents have said to me sticks with me and rings in my ears at times when I really need it. One that has recently been playing through my mind is

You are your child’s dignity surrogate

Have you ever thought about this?

When my friend shared this idea with me I didn’t quite grasp the concept so she explained it to me using this example:

“Have you ever seen a group of adults from a group home or day hab at a supermarket? They do the day hab shuffle, roaming around the market in one disheveled group clustered around a shopping cart.”

Then my friend asked, “Do you shop like this? Then why should they?”

There is no self-respect in that, there is nothing in that experience that is normalizing and everything about it points out their differences and makes them unapproachable.

Think about how this might apply to our kids. When they are out and about in public, are we helping them to present themselves as dignified members of the community? Are they dressed appropriately, clean, groomed? It may sound silly to ask… but do they smell good? These are things that are so easy to overlook (heck, most days we’re just happy to have made it to the grocery store in one piece), but in reality they can make a huge difference in how others respond to – and yes, judge – our special needs children.

I confess that as Shelby’s mum I am not a great dignity surrogate. When I don’t wash marker off her face and then leave the house – not OK. But in my head I’m proud that she colored with a marker! I’m proud that she was OK with having that spongy wet texture brush across her face! But the people I’ll come into contact with on my errands don’t know that and don’t see the marker stains as a victory. It is not respectful to Shelby. It does not help her represent herself in the best way possible. And I would never knowingly leave my house with marker all over my face, would I?

Another thing to consider when thinking about dignity surrogacy is the context of safe people and safe spaces. I don’t have a great track record when it comes to this, either. I overshare my own life and my kids. I need to remember that WHO we’re with and WHERE we are need to be factors that influence the degree of dignity I provide Shelby; not that she ever deserves less, but there are some places and people with whom I can let my guard down a little.

I tend to be more open on Facebook (if I wasn’t I would not have gotten all that great advice on how to combat a terrible bout of constipation). But I should not have let Shelby roll around at a cookout where she ended up tipping a compost bucket all over herself. I put the sensory experience of crawling around a wood deck before her dignity. Changing these bad habits are a small step in removing the fear, uncertainty, and uncomfortableness others feel when they see our families.

And one more thing to consider about safe people and safe spaces: It’s important for our children to learn that certain behaviors that are appropriate around family and close friends, are not appropriate in public and teaching that life lesson begins directly with our modeling. For example, changing a diaper on the living room floor is OK, changing a diaper in the middle of a doctor’s waiting room is not OK. Why? What’s the difference? Running around naked at home before a bath is OK, but running around naked at the mall isn’t. We need to explain these differences and nourish our kids’ understanding of dignity and appropriate behavior. This may seem like a small thing when they’re a toddler, but leads directly to concepts of sex education and self-respect as they mature. Even something as simple as teaching a blind child to close the door when they are getting dressed can have huge ramifications as they get older. 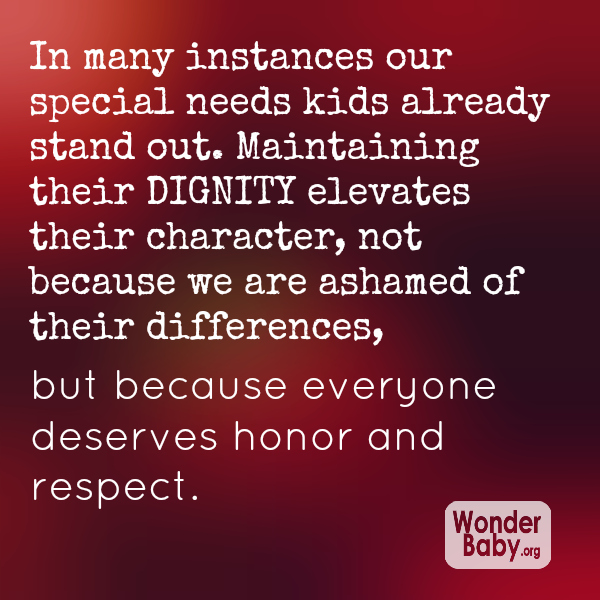 In many instances our special needs kids already stand out. Maintaining their dignity elevates their character, not because we are ashamed of their differences, but because everyone deserves honor and respect. Think of your role as dignity surrogate as just another adaptive device your child needs, but instead of being facilitated by a chair or an iPad it’s facilitated by caregivers, parents, and teachers. 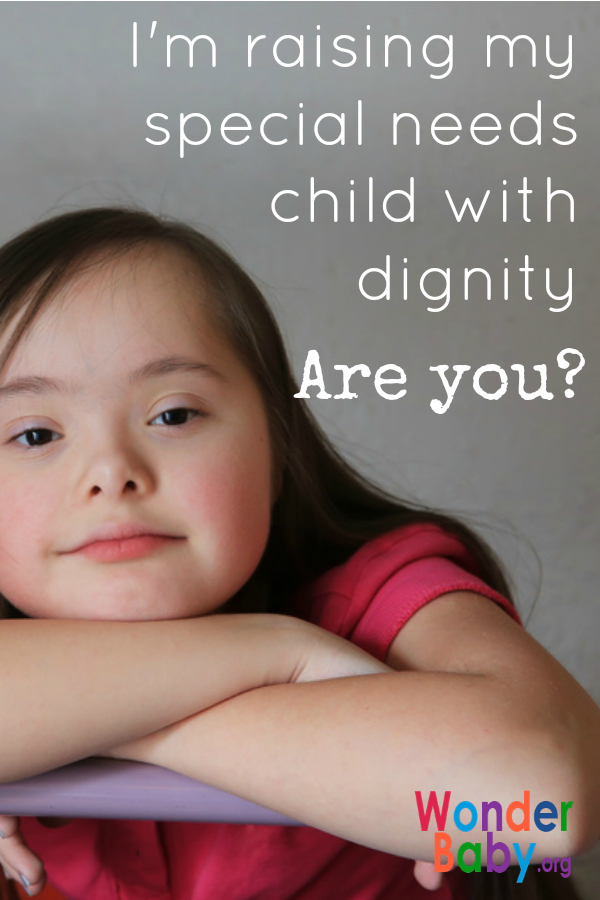