Friends Helping Friends: Why Special Needs Parents Have to Rely on Each Other

A friend told me about a friend who just got her daughter a free iPad through the iCanConnect program.

iCanConnect is the national deaf-blind equipment distribution program and they focus on getting free communication software and devices to people who are deaf-blind.

What? You haven’t heard of the iCanConnect program? Did the words “free iPad” get your attention?

Well, that’s the problem, isn’t it? There are so many “programs” and “resources” and “services” available for your child… but how do you find out about them?

More often than not, it’s from a friend. Or a friend of a friend.

Parents of children with disabilities research and network in order to find the best and most appropriate services for their kids. But it’s exhausting work and it often feels spotty, like we only have access to the resources that we hear about through the grape vine. What are we missing? And isn’t there a better way to do this?

Noelia (the friend of my friend) heard about the iCanConnect program through her (you guessed it) friend. She was at a parent support group when it was mentioned by another parent.

Noelia’s eleven-year-old daughter, Abi, is deaf-blind with chromosome 2q deletion syndrome. She has global delays and an almost unparalleled attraction to the interaction and feedback she receives through an iPad. Noelia wanted to get Abi an iPad but didn’t know how to go about doing that… until her friend told her about this program. 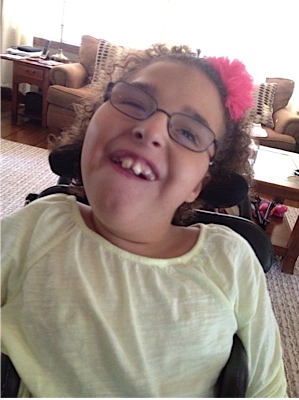 “It’s like there are hidden treasures out there that you have to uncover,” says Noelia. Parents have to work so hard to find these programs (some of them seemingly right in their back yard), while the system focuses on keeping professionals in the know. As Noelia points out, “This information needs to funnel down to the person who actually interacts with the people who need it,” whether that’s a case manager, social worker or the parents themselves.

Once in the iCanConnect program, Noelia was very pleased with the process. She had to fill out some simple paperwork and get a signature from someone who worked with Abi. Then there was an evaluation where they figured out what would best benefit Abi. In the end Abi was supplied with a new iPad, a case, a three-year warranty and a wheelchair mount. They could have asked for switches too, but Abi really enjoys the touch screen so Noelia didn’t think it was necessary.

The whole process took about two or three months and (as you can see in the photos) Abi couldn’t be more delighted! Noelia was very happy with the program, but she adds, “Abi could have had this last year if I had known about it sooner and that kind of breaks my heart.”

Besides the trouble of actually finding appropriate programs and services for your child, there’s also the issue of having to ask for free stuff. “There’s a fine line between being an advocate and asking for a handout,” says Noelia.

So what do we do about it?

First off, as parents we all need to be plugged in with as many support groups and parent networks as possible. Of course our case managers and social workers should be better at getting this info to us (and we should keep them informed when we find information too), but in the meantime we need to do the hunting ourselves and then spread the word amongst our friends. Which means we all need to stay connected with friends in the special needs community! We are our best resource!

And second, we have to push, research, advocate and yes sometimes ask for free stuff. It’s not for us, it’s for our kids. It’s hard work, but we’re the ones who are best equipped to do it.

As Noelia says, “Sometimes you want to quit and then you look into your kid’s eyes and say, ‘I can’t.’”

Keep looking and fighting… then share your knowledge with the rest of us!

The Council of Citizens with Low Vision International (CCLVI) is dedicated to providing information and tips to help you live well with vision loss.