How Can I Get My Son To Keep His Glasses On?

I need proven techniques used to get a two year old to wear his new glasses. Any suggestions will be greatly appreciated!

I really like the blog Little Four Eyes for info about glasses.

In the post about just starting out with glasses, the blog says:

“Many places will tell you that once your child realizes that they see better with their glasses, they’ll be much more likely to leave them on, and even ask for them first thing in the morning. And that’s true, but the trick is getting through that initial stage when they don’t want these funny things sitting on their face. Every child is different, some will take to their glasses immediately, while others fight tooth and nail for months. We recently did a poll on how long it takes kids to wear their glasses reliably, about 65% were wearing them well in a week or less, but more than 15% of the kids take longer than a month before they’ll wear them reliably. Odds are your child will surprise you and take to their glasses quickly, but if they don’t, know that you’r not alone in your struggles.

“While there are a lot of strategies to get your child to leave their glasses on, the key seems to be to stay calm and positive (which is easier said than done) and consistent about keeping them on (ok, this is also easier said than done). When your child takes them off, put them back on with a smile, but don’t make a big deal about it. If they are really fighting or upset, set the glasses to the side for a few minutes until your child calms down and try again. You’ll also want to have activities on hand when you put those glasses on. Boredom and glasses do not mix!”

You can also check out:

“I don’t think there are any real proven techniques. If there are, we never found them. It just took time and patience. And several replacement pairs.”

“Just read this! My 9 month old has to wear glasses for protection of a good eye (she has retinoblastoma) so they don’t really help her see. I’ve been trying the approach of putting them on in the morning and each day making her wear them longer than the previous day. She’s doing okay, but likes to pull them down to her mouth and try to eat them. I totally agreed with the part about having something for them to do! If I keep her hands busy, she doesn’t pull at them.”

“My daughter got her first pair at a year old. See has light perception so they don’t help her see during the day, they have reaction lenses to help protect from the sun and to detract from poking her eyes. She tolerated them at nursery but would take them off at home. We never battled with her as she’s very stubborn and it just makes her worse. We just kept putting them on as part of her routine. At about 18 months we changed them for a pair with normal arms (no curly ears bits) as she was wanting to take them on and off by herself. She loved putting my glasses on and off she thought she might get on better. She now wears this new pair consistently, so pleased we changed them. Hope you find your answer soon.”

“My son WOULD NOT wear normal glasses for years, but as soon as we got him prescription sunglasses he was happy and now wears them all the time. Just an idea :)” 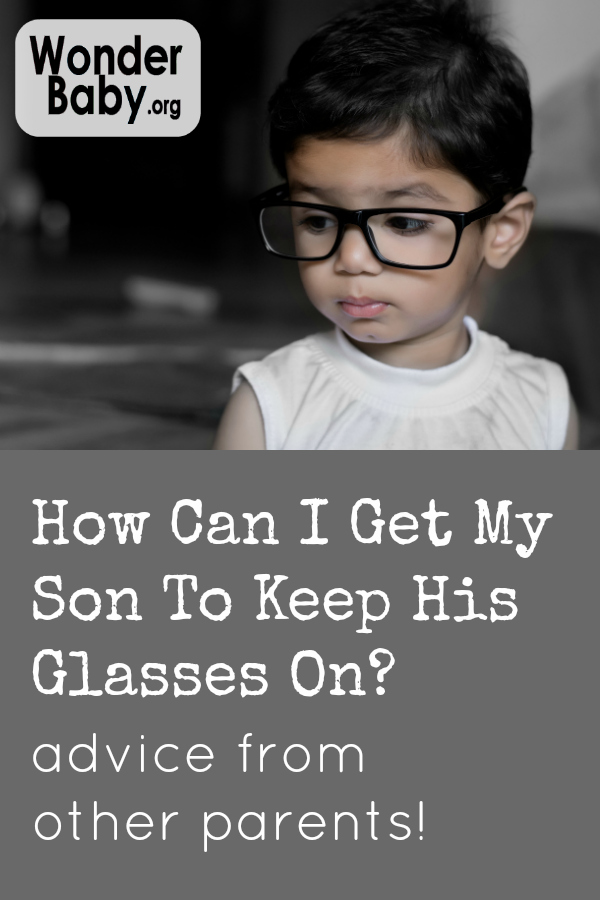