UPDATE: You can now sign up to be a tester of the new BLITAB and be one of the first to try it out at home!

BLITAB Technology, an Austrian start-up company, has developed the first-ever braille tablet, using a new “liquid-based technology” to create tactile relief outputting braille, graphics and maps for the blind and partially sighted. The innovative technology opens a complete new world of content to users who are blind. 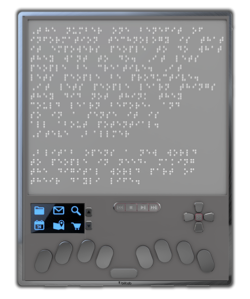 The goal of BLITAB is to produce a next generation affordable and multi-functional device for Braille reading and writing that displays one whole page Braille text, without any mechanical elements. BLITAB is like an e-reader that forms small bubbles on the surface which are haptic and stable enough to be touched and read by the finger. The device will generate 13-15 lines in Braille code while the corresponding technology allows text files to be instantly converted into Braille from USB sticks, web browsers or NFC tags.

BLITAB also plans to include a cloud based software service. What does this mean for the consumer? One example could be that you purchase a book from Amazon, convert it into Braille via the BLITAB cloud, and voila! You just downloaded it into the tablet to read at your leisure with the convenience of mobile technology to do so anywhere, anytime!

You may have even already heard about BLITAB® since they’re making headlines on popular news and creative design websites around the globe. They’ve already won awards for the technology involved in the innovative device, too! So, where are they now? Well, they’ve signed up 2500 testers (among them 300 children!) in 34 countries worldwide. Testers have already deemed the device to have the potential to reinvent Braille usage, to increase literacy among children, as well as boost labor and technological inclusion of all people who are blind. WOW!

Now, when will you be able to buy your own BLITAB device? If all goes well and their ongoing financing round is successful, then the startup is planning to bring the first BLITAB product to market by Fall of 2016! Exciting!! If you just can’t wait, how about signing up to join the BLITAB® Community?

You can stay updated with BLITAB’s progress by liking the BLITAB Facebook Page and following @blitab_ on Twitter, as well as checking back with In The News on WonderBaby!