But before he was gone, the doctor did stop briefly by my side to show me this little red baby covered in cottage cheese. All I could really see was his right ear and all I could think was, “His ear is perfect.”

Then he was going down one hall while I was wheeled down another.

When I finally got to see him again a few hours later he was cleaned up and sleeping peacefully. I sat next to him and thought, “Wow. He’s just perfect.”

This was around the time that his breathing became labored and abnormal and we were rudely introduced to the world of the NICU, MRIs, O2 saturation monitors, sleep apnea… and blindness.

It took months for our life to calm down in any way that would allow me time to really think again (and I do often wonder how much we lost in those early days of Ivan’s life running from doctor to doctor and test to test).

I distinctly remember leaning over to look at him while he was in his crib just starting to wake up from a nap. He was turning his head a little and yawning and I thought, “He’s just so perfect, but…”

Hey! Where did that come from? But what?

I caught myself in the middle of that thought, but couldn’t let it go. How can he be perfect if he can’t see? Obviously there is something really wrong with his eyes (we had no real diagnosis at this point), and isn’t perfect the absence of wrong? 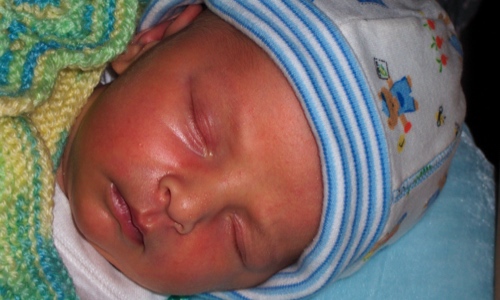 If I could go back and talk to myself then I would have so much to say! But I think this would be the most important: No. Perfect isn’t the absence of disability and perfection has nothing to do with Apgar scores or developmental charts.

Perfect is that feeling you get when your baby’s skin touches yours or when you feel his weight on your chest. Perfect can be his ear-piercing cry at 3 in the morning just as much as it can be his adorable yawn as he’s falling back asleep.

Perfect is that funny little thing his nose does when he’s chewing on a toy or the way his finger nails are so tiny and so sharp at the same time.

Your baby is perfect because he is your baby. Your prefect love for him fills him with perfection. There is no need to qualify that perfection. It just is.

I’m ashamed to say that it took me over a year to realize this. I kept thinking, “He’s perfect, but…” for much too long.

One day I realized that I was finally seeing my little boy for who he really was. He was sitting on the floor propped up by his Boppy pillow clumsily turning a toy over and over in his hands, feeling the edges, popping it in his mouth to get a better understanding of it, then popping it out again. He dropped it and heard the sound it made when it fell.

And I thought, “He’s perfect.” 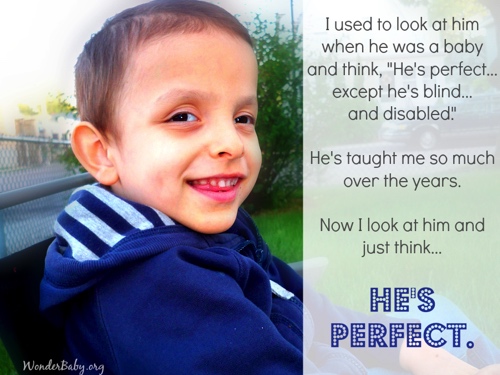