When I Feel Alone as a Mom to a Child With Anophthalmia, I Remember This

This past week Ivey took her first beach trip. In fact, it was her first vacation and one that she had very much earned. As always, she astonished me. My sweet 14 pound 17 month old brought the sure basics of life straight to the surface.

Let me backtrack for just one moment. Soon after Ivey was born my friend Sarah gave me a copy of the poem Footprints in the Sand.

Reading the poem for the first time after Ivey’s birth was a God Moment. I taped it to the inside cover of a picture book of Ivey’s.

I cannot tell you how many times I have read over that familiar poem in the past year, always searching out some means of comfort. I had read the same poem hundreds of times before Ivey’s birth, but after she was born the poem took on new meaning. Suddenly I was the one walking alone.

Those words describe life, at times, with a special needs child. It feels like you are the only one. Throw in an obscenely rare trait like anophthalmia and the loneliness intensifies. It magnifies itself to an incomprehensible point at times.

Some days I want someone to say “I understand” and mean it, especially during weeks like this one, where Ivey’s seizures tighten the coils. Our neurologist wanted to try to isolate exactly which type of seizure Ivey is having; however, he’ll have to do some research. She also developed a urinary tract infection. We spent Friday having ultrasounds because of that. Now we must wait till next week to find out if Ivey has issues with her kidneys. In all likelihood she does not. She has spent the past year without any problems with her bladder or her kidneys. Nevertheless, we have been warned that over time we will probably find more problems. So, three more days loom ahead of us until we know.

The walls close in tighter.

But let’s head back to the beach.

Very early one morning I carried Ivey down to the beach. There was no one out except the occasional morning jogger. We walked the beach for a while then came back to the spot in front of our condo. There I knelt down so Ivey could stand in the sand while waves washed up on her feet. As the water washed over her tiny feet and buried them deeper into the sand, she would grow very still and tilt her head to one side, concentrating intently. She was completely in the moment.

Watching Ivey take in the sounds, smells and feel of the water and sand brought tears to my eyes. For some reason I began to think about that poem as we were kneeling there. Early mornings on the beach are so serene. As we stood up to go back inside I looked down the beach one last time and that is when I realized the poem is completely right yet it leaves out something very important. 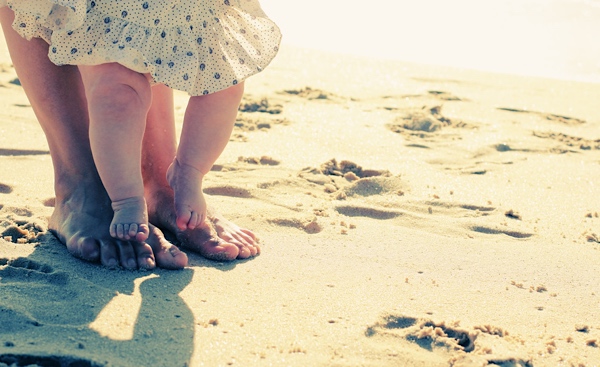 In the poem it says when you see only one set of footprints you are not alone. It is then that God is carrying you. However, there were countless footprints on the beach that morning even though no one was there. Not only are we lifted up and carried, but we are also braced by those around us in our daily lives, whether placed there by intention or default, and only if we choose to be.

I think that along the way there are many people, angels if you will, who are there to help too. Those walking in our lives daily leave those same footprints in our hearts. They may not be able to step into my shoes and feel the weight at times, but many of them are mothers and can imagine. They are also friends who sometimes sit there on the sidelines feeling helpless in trying times, other times they feel the excitement of good news. Those are God Moments too.

Most often the strangers yank me back into reality and remind me that I am making choices to perceive myself as journeying alone. Last Sunday we stopped at a restaurant for dinner on our way back home from the beach. We were about to leave when two elderly women asked if Ivey had a problem with her eyes. As my mom held Ivey, I explained Ivey’s condition and answered various questions about her medical situation. They both shook their heads saying that Ivey is a miracle baby.

Finally, one of the women asked if she could lay her hands on Ivey and pray. So they both did. And right there in the restaurant they began praying aloud for my daughter. I watched as my mom fought back tears. I watched as Ivey smiled at the two strangers touching her hand and leg praying for her.

Sunday as I sat in the ER watching Ivey have her second seizure, I thought about those two women. The thought brought comfort—not loneliness.

We are surrounded by people who are willing and wanting to help us carry the weight. Some come in the form of strangers—others we call friends. Either way, God has placed very special people in our lives as a tangible means to feel that we are not going at this alone. There are others out there. Sometimes you have to go find them; other times they find you. 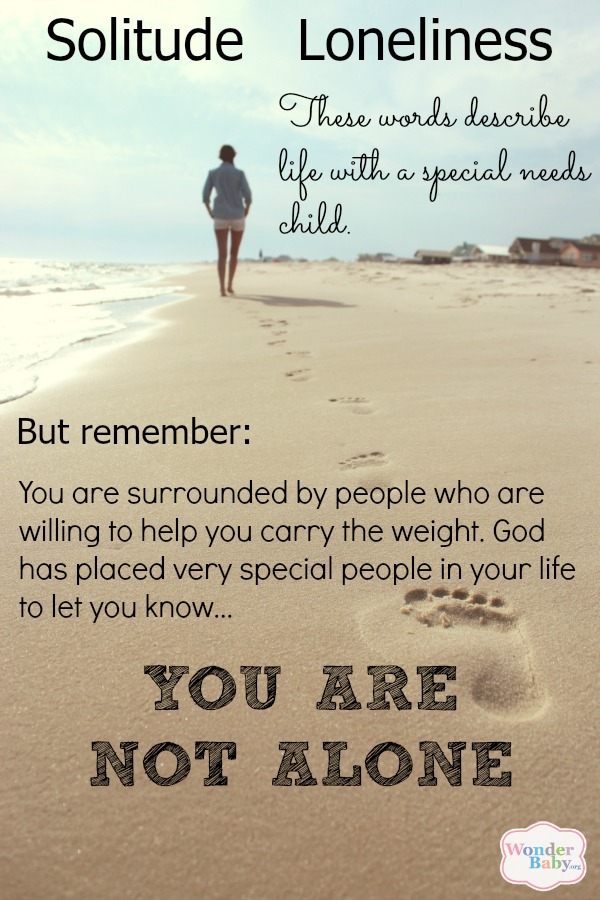