A Letter to New Parents Living with Microphthalmia

My name is Jacalyn and I am twenty-seven years old. I live in Kalamazoo, Michigan where I work as a Youth Development Coordinator for young people who have severe emotional, behavioral or mood disorders. I live with my husband, Tim. Both my husband and I have bilateral microphthalmia.

When I was born in 1980, my parents noticed that my eyes were closed tightly. My mom has two cousins with Micro and she says that despite the doctors denying it, she knew right away that I had Micro. She comforted a crying pediatrician, the next morning, as he confirmed that I did have bilateral Micro. My parents were told immediately that I was totally blind with no hope of vision.

I was born in a small town in Wyoming and the doctors there had very little knowledge about microphthalmia so we were sent to Denver Children’s Hospital when I was a week old.

The first pediatric Ophthalmologist to see me in Denver began the session by using metal clips to hold my eyes open. He then laid me on a table and began shining lights into my eyes. I, of course, became instantly hysterical and remained that way for the next two hours as he continuously talked into a voice recorder. He did not talk to my parents that entire time but only said things like “Infant presents with severe defects and appears very aesthetically deformed.”

Afterward he took my parents into a room and thanked them for letting him use me as his subject for the article he was going to write about me. Apparently he had never seen Bilateral Micro and thought it was a great opportunity to gain some status by publishing in the medical world. He then proceeded to tell my parents that he suspected that I would have severe brain damage (because my eyes were so deformed). He told them I would never see, never talk, probably never walk. He suggested they schedule a surgery the next morning to have my eyes removed and replaced with shells so that I would be “more aesthetically pleasing.”

Needless to say my parents picked me up and ran out of the office as fast as they could. We never returned to Denver.

Despite a couple of other doctors confirming that I had no vision and giving me a very grim prognosis my parents became my biggest fans and total and utter servants. My mom learned infant stimulation and engrossed me in every sight, sound, texture and smell she possibly could. My parents say that I cried and cried as a baby but my mom believes now that I cried because my brain longed for stimulation and I needed to demand it for proper development. 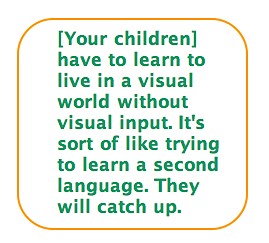 When I was about six months old my parents began to notice that I looked toward the window as I lay in my crib and that I would track a ball if it were bright or if it lit up. My mom expressed this observation to doctors who continuously called her delusional and in denial.

When I was three years old my ophthalmologist was blown away when I asked him why he had a hairy face. It was the first time they began to believe that I could see. Today I have very little vision in my left eye (which has a clouded cornea), but a lot of usable vision in my right eye. My vision is actually corrected to 20/40 with glasses in my right eye. I see well enough to read regular print and type this by reading the computer screen. Doctors do not have any explanation for my vision, my eyes look “blind,” but I know I have much of my vision because of the constant stimulation I received. I think that I learned to use the small amount of vision I do have to the FULLEST of its ability. My brain has learned to interpret things with few visual cues, but it does pretty well.

So what are the things that I really think helped me in early childhood?

Oh, I should also mention the following things:

The point of mentioning these delays is to say that just because your kids don’t meet all of their milestones on time does not mean you should worry. They have to learn to live in a visual world without visual input. It’s sort of like trying to learn a second language. They will catch up.

I started school when I was two years old. At first I went teo days a week, then three, but by three years old I went five days a week for five hours a day. My parents and great early childhood teachers decided that they would get me as far ahead as possible so that I could be mainstreamed. By the time I entered Kindergarten I was reading at a 3rd grade level. BUT here is where my parents and educators made one HUGE mistake. They were bound to make one somewhere, right? They didn’t teach me Braille.

Braille is expensive to teach and your school district will probably try to avoid it if your child has ANY vision. DO NOT LET THEM! I REPEAT, DO NOT BE CONVINCED OR BULLIED INTO THE IDEA THAT YOUR CHILD DOES NOT NEED BRAILLE!!!!!!

I have seen countless children who need 72 point font and are reading ten words a MINUTE AS A SIXTH GRADER! THIS IS NOT ACCEPTABLE! Braille is absolutely ESSENTIAL for 90% of visually impaired children and only about 10% are receiving it. They will try to tell you that your child is a fine print reader, but I can tell you that honestly I think I would have had so much more success if I read Braille. I did pretty well, but my eyes got tired and college reading was so difficult after awhile, it would have been so nice to depend upon touch instead of sight at the end of a ten hour day.

Here are some statistics to back up what I am saying. Only 10% of blind or visually impaired children are learning Braille, but 90% of all blind adults who are EMPLOYED are Braille readers. PLEASE PLEASE demand your child learn Braille, do not force them to depend upon a weakened sense of vision to be literate. Your school may try to say that because of technology your child doesn’t need Braille: THIS IS A TRAGEDY! If your child has to depend upon a screen reader or book on tape then they are virtually illiterate and that is illegal.

Other than not learning Braille I did well academically. I graduated from High School in 1999 and went to the University of Wyoming and received my BA in Psychology in 2003. I then went to South Africa and started a Summer Camp for children and adults with disabilities. The camp is called Higher Ground.

In 2006 my visa expired and I was forced to move back to the states. I moved to Michigan where I worked as a camp director at an awesome camp for blind kids called Camp Tuhsmeheta, where I met my husband Tim. Tim also has microphthalmia.

Just to give you a realistic idea of how wrong Doctors can be: My IQ scores are around 170. I had a 3.9 GPA in college. YUCK, it sounds like I’m bragging, but really I just want you to see that your instincts trump Doctor’s opinions EVERY time.

So, now I need to touch on one more subject that is VITAL and that is ATTITUDE! Despite my parents best efforts I was raised with a silent societal attitude that the more vision you have the better you are.

Totally blind people are not as good as partially sighted people, or people who are partially sighted are not as bad as those who are totally blind. This is the normal attitude for society as a whole and this is where it gets complicated. You have got to really look at yourself and see if you feel this way. Ask yourself if you would be excited and brag to your friends if your child could “see” something you didn’t expect them too.

If you would, and most of us would, then you have to change that philosophy now. We all know that you love your child and you are most concerned with their future, but the best thing you can ever do for their future is teach them that Blindness is NOT a DISABILITY or DEFECT, but a CHARACTERISTIC.

You see, without that attitude your child will grow up feeling less worthy, less capable, less able than the sighted world. You have got to explain to them that whether they can see a little, a lot, or nothing at all does not change their worthiness at all. It is not a factor in their character or potential. I know this is difficult because society says that blindness is something to be pitied, but your child now has the opportunity to educate the public that their Blindness is a beautiful part of who they are, not something to be ashamed of or judged by, just another beautiful part of them. THIS IS THE SINGLE MOST IMPORTANT THING I HAVE TO SAY!

Today my life is good. I have concerns, like watching what I eat, and wondering what is happening to this country. I have worries, like when will I finally get pregnant (my husband and I have been trying for a while), and should we buy a house or keep renting. You see my concerns and worries are much like any of yours (or perhaps I am extra crazy). My vision rarely, if ever, makes my life harder than anybody else, plus I have the added benefit of just showing up and having people think I am amazing! Ha-ha-ha.

The biggest pain for my husband and I is not driving and yes there are times (like in the dead of winter) when this ticks me off, but maybe it forces us to spend more time together, for instance, when I work late my husband and our dog walk and pick me up so we can walk home together. This is time we would not spend together if I could drive. Tim and I have to work together, we have to go grocery shopping together so we can carry the bags home, all of these things make us closer and stronger as a couple and I am grateful for them.

Do not worry about your children who are blind. If you let them, they will be very much like all of your children. They will go to school, get into fights, fall down, get stitches, have scabby knees, misbehave, sneak out of the house as teenagers, make you proud, say embarrassing things, have talents, and have things they are not talented at. Just love them and believe in them and by all means let them fall down and instill in them that they are beautiful BECAUSE they are blind not despite it. 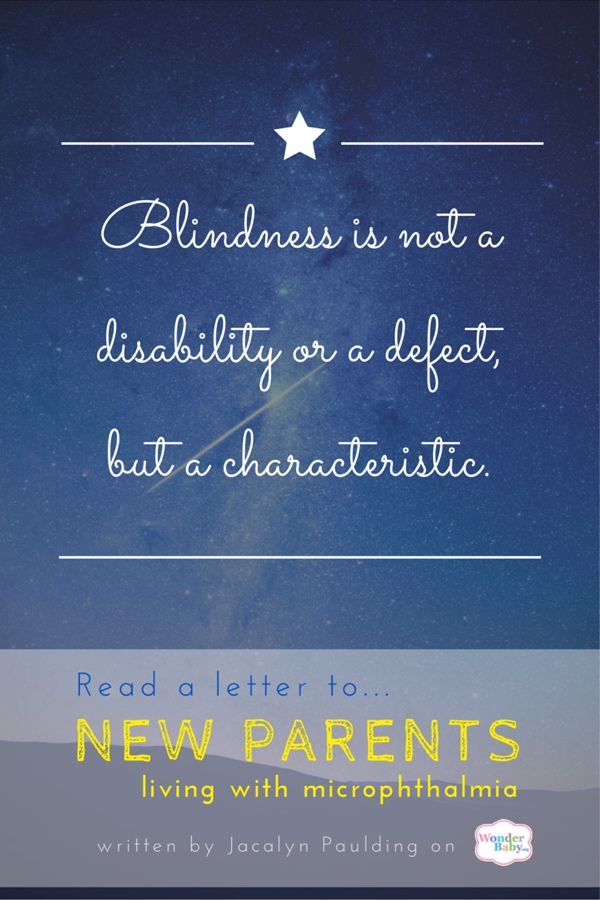