It was August 2009 when I discovered that I was pregnant. I was so happy, but also scared at the same time as I was not sure how to tell my dad and my partner’s parents.

I was so scared that I had to ask my mum to tell them. They were all shocked and even disappointed, but as the days past we received a phone call from his parents congratulating us both.

I was so relieved to know that they were happy for us. As for my own dad… well, he didn’t come round to the idea until about two and half months later, but everyone needed time to get there heads around the situation.

As my unborn child would be the first grandchild on both sides of the family, it made it even more special (and I know this baby will be very spoiled).

On the 10th of October I had a letter through the post with my first ultrasound dated 22nd of October. As the morning began I was very excited knowing I was going to see my baby for the first time!

At 9:30am it was time to go in and finally see what I had been waiting for! As the midwife put the petroleum jelly on my stomach and started searching around my belly there appeared a beautiful little baby on the screen. I was so happy and relieved—everything was fine. Just to hear its little heart beat and seeing it there for the first time was absolutely amazing.

As the weeks past by I noticed myself getting bigger in the tummy area and the hips, but i just thought to myself it will all be worth it in the end. On the 15th of December I had another ultrasound letter for my twenty-week scan. This would be the last time I would be seeing my baby until the due date and also finding out the sex hopefully.

When the day arrived, I walked into the scan room and lay on the bed feeling very anxious to see my little angel. As the screen started to become clearer, I noticed that my little baby was so big now! I just wanted to know the sex, so as I held my partner’s hand waiting for the answer, the midwife said, “Congratulations! You’re having a little girl!”

My face just lit up with delight! I could finally get all the things I needed for my little princess!

As months past by I was getting more aching in my back and could not sleep properly. On May 16th I was in so much pain, but did not rush to hospital as I was only in slow labor. That night I went out for a meal with my sister, her partner, my partner, and our mum since it was my sister’s 16th Birthday.

As the night passed on, I was getting more and more pains and could not sit down anymore. When I got home I had a bath then settled down and realized that I was having more and more contractions.

By then it was morning and I arrived at the hospital with my partner and my mother (as they were my birthing partners). As I lay there to see how far along I was, I was told it was a good job I came in as I was 7cm dilated! 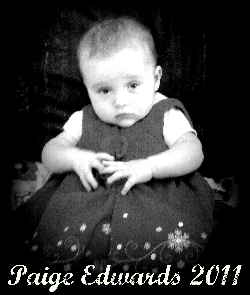 At that time it was 10:30am and by 6:45pm my little princess, Paige, made an appearance! She weighed 7lbs, 0oz. Her eyelashes were long and beautiful and her toes and fingers were so delicate and soft. Well, she was just perfect! She is perfect! I could not believe she was finally here!

As I didn’t have her until late in the day, I had to stay in hospital over night which was good, as my little girl had her hearing test in the morning, after which we were allowed to go home.

As weeks past by my little girl was 8weeks and had to have her eight-week check up, along with her first lot of injections. When she was getting checked over, the nurse asked if i had noticed anything different about my little girl. I replied no, as she is my first I was unsure what she meant. I began to ask questions and the nurse said, “I think she may be blind.”

That was it. My heart felt like it stopped and I just wanted to cry, but I kept it in as I knew this wasn’t confirmed yet. The nurse reffered me to see an eye specialist in Rhuthin H.M Stanley Hospital.

Finally the date arrived and we met with the specialist. He couldn’t really see what was wrong with her and he said that her eyes look normal, just her pupils were very dilated and stunned.

So he reffered me to Glan Clwyd Hospital for Paige to have an MRI Brain scan. She went in for that and the scan came back normal, which meant she didn’t have septo optic dysplasia (SOD). As they could not find anything wrong with her brain, they then transferred her to Alder Hay Children’s Hospital in Liverpool where they did an amount of tests on her.

Three months later the results finally came in that she was blind, but her eye sight could develop as she gets older. By this time, none of this came as a surprise, so I was not upset like I was when I heard it the first time.

My little girl is now nearly nine months old and has to visit the Children’s Centre in Rhuddlan every friday from 1pm until 2:30pm as they do a lot to help her with her movements and sight development. Because she is visually impaired, Paige is unable to balance properly, but she is still as normal as any other baby and I do not want her treated any differently.