Surviving the First 18 Months After Learning Your Child is Blind

I knew from six weeks of age that something wasn’t quite right with my son. The doctors thought I was being paranoid, but a mother knows her child and I knew something was wrong.

Everyone told me to stop worrying and that children all develop at different rates. Cut to age four months and we get the phone call, “Your son is blind, he has a rare condition called Leber’s Congenital Amaurosis and unfortunately is at the severe end of the scale.”

I felt like someone had just ripped my heart out, I was so scared for my baby boy and how this would affect our older son. My world was collapsing and the tears flowed freely.

The days went by and life had to continue. I pretended everything was normal as I dropped my older son at preschool and tried to avoid the other parents. I was convinced everyone was staring at my baby, wondering what was wrong with him.

A snap decision was made. “Let’s sell the house!” I yell to my husband. I needed a project to take my mind somewhere else and my son needed a safe and accessible environment. The phone call to the agent was made and four weeks later the house had been renovated and was on the market. I look back now and wonder how we achieved that in times of such sadness and confusion!

Life was continuing and I started to realize how strong we were becoming. The tears were drying up and a new attitude was forming. I looked down at my baby boy and thought, “If I crumble, who is there for you?” I’d turned a corner; I’d accepted his condition and was going to embrace this new life.

I started reaching out to others including parents of children with LCA as well as blind and visually impaired adults. I was always searching for Facebook groups, websites or blogs containing positive stories and was not disappointed. The support I received from family, friends and strangers was overwhelming and I sensed a really strong community out there that we could become a part of. 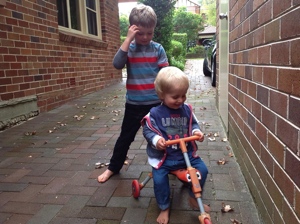 Luck was on our side and we found a new house that we believed was perfect for a blind child. The garden gate opened onto a beautiful reserve fully equipped with a children’s playground and nature aplenty. The birds were singing and our sprits were high. Yes, our baby was blind but we were happy and determined that he would have a fantastic life.

A raft of people had entered our lives: Physios, specialist teachers, orientation and mobility instructors… all of whom have been a guiding light in our lives. They all have such a positive attitude and you just can’t help but get infected by it. My son was achieving things that back in the very early days I had never imagined. At 18 months he was walking unaided, climbing stairs, jumping on the trampoline, riding a trike.. all stuff that other 18 month olds are doing.

My new found positivity drove me to want more. I started learning Braille, I pushed for him to start cane training at 13 months old (who cares if he could hardly stand)… I wanted him to get ahead as quickly as possible! I contacted anyone I could think of who might help me in some way. I spoke with a blind marathon swimmer who encouraged me to start my son swimming. Now every week we go to the pool and he loves it. I read a book about blindness, Touching the Rock: An Experience of Blindness, and contacted the author, John Hull. To my shock he wrote back immediately and has had a profound impact on my life. His words encouraged me to look at life differently, to do simple things like let my son feel the wind and rain. He was correct and the joy on my son’s face on a windy day is immeasurable.

However, I won’t sugar coat it all. Yes we have a lot of problems. My son is 19 months old now and we are still dealing with the constant eye pressing; feeding is difficult and everything has to be puréed; speech is yet to form; his face is covered in bruises from constantly walking into things… but we are confident that these things will improve.

I often have moments of sadness, but I have adopted a can-do attitude and am so determined that my son will have the best start to life that I can give him. Recently a parent of a visually impaired child told me that my son had been an inspiration to her. My heart nearly burst with pride! He is a great inspiration to me but I never realized that others also thought this.

In the very early days of a diagnosis you don’t know how you will carry on. Well, it’s certainly difficult, but having a positive attitude, trusting yourself and believing in your child will give them a great start in life! 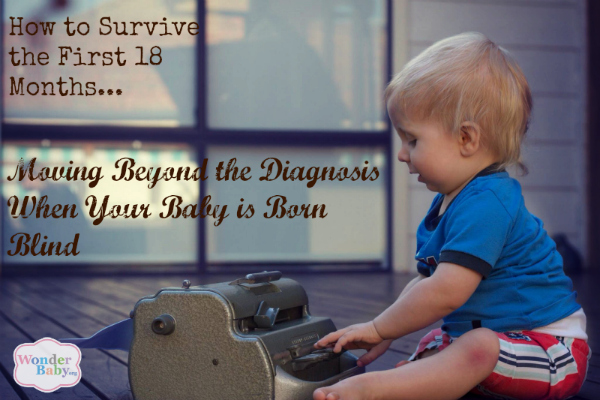