Here Comes the Future… and it’s in Three Dimensions!

An odd thing happened recently and for a very pleasant change it was the kind of odd that is unexpectedly really, truly lovely! I’d like to share our experience with you….

My daughter, Elizabeth, whom you may have read about elsewhere on WonderBaby.org, is seven years old and, amongst a great many other things that can be said about this extraordinary child, she has albinism and is registered blind.

One of her friends was having a birthday party treat of a visit to the cinema and pizza afterwards and Elizabeth was one of six children invited. Like most parents of disabled kids we are very aware of the need for us to foster her peer group’s understanding and acceptance of Elizabeth’s disability and there’s no better way for a child to have both the social learning environment and the rewards for acceptable behavior than A Birthday Party!

The hardest part had already been achieved; she had been invited. The Birthday Girl’s mom got in touch with us a few days before the big day to ask if there was anything she could do to make the day go more smoothly for Elizabeth (nope; but it was so sweet of her to ask! Other parents, parents of “ordinary” children, can be so quietly, thoughtfully, sensitive) and told us how excited the Birthday Girl was about the movie: Kung Fu Panda 2 in 3D!

Words to strike fear into even the most redoubtable hearts of parents of a child with a visual impairment. We are not regular cinema goers by any means and whilst we had heard of the technology, it could only serve to complicate further Elizabeth’s experience of the film. But, as they say, nothing ventured; nothing gained; you have to speculate to accumulate, etc.

We had already decided that I would be going with Elizabeth in order to narrate and explain the flow and details of the plot. Now we had to build in the boredom factor of 90 minutes watching a film she would be able to see significantly less of than usual.

I could hardly contain my excitement! (I’m being ironic!!)

In truth though, it’s all good: Sometimes being a friend, a good friend, is about spending time doing something you would much rather not—and not complaining about it throughout! Seven is a good age to start learning about how to be a good friend.

On the day of the party we explained to Elizabeth about the 3Dness of the film and how it might seem particularly blurry. She accepted this as a matter of fact and, happily, was more keen to be seeing her friends than seeing a panda doing Kung fu.

As we settled down for the film, there was a small hiccough whilst I tried to get Elizabeth to understand that the specs I was holding (which looked remarkably like her blackout specs) were not to replace her corrective specs, but to be worn with them. 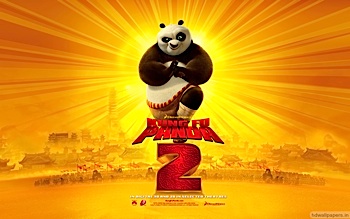 Then, problem sorted, and a row of wee girls looking a lot like the Blues Brothers, the film began. If you haven’t seen this film (and I can’t imagine what you’re waiting for!) the opening scenes are of cherry blossom petals dancing in a light breeze.

I realized Elizabeth, at my side, was moving and I turned to correct her behavior. Her little hands were trying to catch the blossoms as they apparently moved around her!

And I could have wept.

The technology, by some magical quirk, entirely enhanced her perception of the images. She was immersed in the pictures. Enchanted by the experience.

If you are the parent of a blind or significantly visually impaired child you will understand how infrequently “new advances” work as advertised for our kids, but this was the real deal.

Here’s what we think happened (and this is a parent talking, so if you can blow my theory out of the water, or improve on it, I’m all ears). Here goes….

It’s a trick (you knew that!): the success of the trick seems to be hinged on the polarization in the 3D spectacles being different for each eye. The brain accepts the “tweaked” polarization, along with the “layers” of the film, as the parallax and incorporating this information in a different way to real life. Commonly, in the real world, people with albinism have very real problems getting or interpreting any visual information about depth which causes them to “fall off pavements,” trip up stairs etc. Elizabeth being able to “see” 3D that day was utterly exceptional—much of the time albinism causes her to live in a flat world. You can imagine then, the significance for our family. 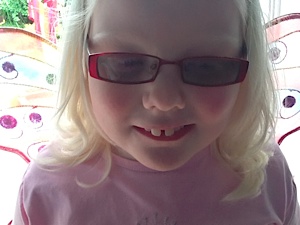 She is an iridescent child living in a magical universe right now; anything can happen and often does. She manages to integrate both the pragmatic and the magical about the performance of the world around her and is often irritated by our lack of adequate explanations, but there is plenty of time for her to find out that none of us defy gravity.

I have no idea if your child will or even can have the experience that Elizabeth shared with her young friends that day. But it’s worth the ticket price to find out—especially if your child has albinism.

Post Script: I could hardly wait (unironically, this time) to get home and tell everyone! But before that was the second part of the party and this time there was no anxious anticipation on my part. Pizza, cake, home; a (birthday) cakewalk!

The menu was read to the girls and then the waitress went round the table asking for their orders. And in a lovely, clear, well modulated and polite voice Elizabeth said, “Could I have spaghetti Bolognese, please?”

Feelif just released two applications that will help blind and visually impaired users have a better understanding of their surroundings and of photos.

Feelif is a tactile tablet that is able to combine native features of the Samsung tablet, like vibrations and the built-in screenreader, with a tactile surface to create a whole...

Switch Play: Using a switch for communication and play!

For children who are non-verbal or have low motor coordination, switches can be a great way to augment their play. If you're just getting started with a switch you may...