In, On, and Under: Teaching Children who are Blind About Location

Basic prepositional concepts like in, on, under, behind, etc. can be very difficult for blind children to master. For one thing, there are very distinct visual aspects to these ideas. For example, it’s easy for a sighted child to watch you hold a favorite teddy bear behind your back then pull it out for them to play with. The sighted child learns quickly that the teddy bear was “behind” your back and that even though they couldn’t see it for a moment it never ceased to exist.

Trying to adapt this same activity for a blind baby can be difficult. Hiding a noise-making toy behind your back may muffle the sound and create a sense of distance but doesn’t quite develop the same concept of an object hiding behind your back or the idea of object permanence (that an object still exists even if you can’t touch or see it).

What can you do to encourage your blind baby to learn prepositional concepts? First of all, begin by teaching your child about their own body. It’s very helpful to have a vocabulary of body parts when talking to your baby about where objects are located. Instead of hiding the teddy bear behind your back, then, you can hide the teddy bear behind your baby’s back. It’s much easier for a blind child to learn that something is behind their own body. Always name your child’s body parts and always refer to objects in terms of your child’s body: the blocks are in front of you, the ring is by your left knee, you put the cup on top of your head! Begin early and soon speaking of objects in terms of your child’s body will become second nature. 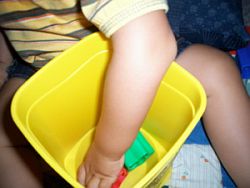 Playing with buckets or bowls full of toys are a great way to teach your child about “in.” However, many blind children are very sensitive to putting their hands in an object because they can’t see what they may be getting into. To help your child avoid developing this sensitivity, begin by playing with large bowls or boxes. Big stainless steel bowls are great because toys inside tend to make a lot of noise as they move around. Also, if your child has any light perception, the bowl can reflect lights in the room or you can shine a flash light into the bowl to encourage your child to reach in.

Once they’ve mastered the big bowl, move on to smaller objects, like toy buckets or even large jars. If your child still won’t reach in, try to entice them with some of their favorite food. Fill the jar to the brim with cheerios, for example, then slowly, over the course of a few days or even weeks, offer fewer and fewer cheerios so that your child will have to reach further and further into the jar to get at the treat.

Another great opportunity to learn about “in” is during feeding time. Find a very shallow baby bowl and encourage your baby to reach in and feel the food. This can also help manage any tactile defensiveness that your baby may develop. Blind babies often reject touching sticky, soft, scratchy or other types of materials. Encourage your baby to get their hands messy from a very early age! 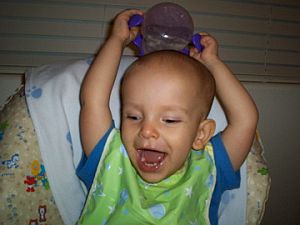 Babies love putting things on their head, from toys to blankets. Encourage your baby’s natural play and remember to tell them they have put something “on” their head. This is a great way to begin teaching the concept “on.”

It is usually very difficult to teach a blind child that something can be under something else because this involves understanding that one thing can be hidden by another. Hiding objects is obviously a very visual game. Placing a cloth over a favorite toy usually results in the baby just playing with the cloth instead of the toy. One way to teach your child that the toy is under the cloth is to play with a noise-making toy and a heavy cloth or blanket. When the toy is under the cloth, the noise will be muffled but still audible. Try to encourage your child to find the toy making the noise.

Another tactic is to place the toy under your child’s shirt. This way you can try to develop the concept as close to your baby’s body as possible.

Our occupational therapist suggested that we have Ivan play with some toys upside down so that he is forced to feel the bottom of the toy rather than the top. We can then explain that his hand is “under” the toy plus his wrists have to rotate in order to feel the toy.

Our occupational therapist also brought us a tub full of aquarium gravel. She showed us how to bury objects in the gravel in order to teach Ivan that objects can be hidden under something else. Once Ivan began to eat the gravel, though, we moved to a tub full of rice krispes. Now he can still bury his hands and his toys in the krispies but we’re not worried about him eating them. However, rice krispies don’t have the same weight as aquarium gravel, whic is a nice tactile input on his hands, so once he stops trying to eat everything, we’ll move back to the gravel.

Another difficult concept to teach a blind baby is object permanence, the understanding that an object still exists even if you can’t see, hear, touch, or smell it. Many books suggest attaching toys to strings so your baby can pull the toy toward themselves and learn that the toy exists far away from their body, but our baby got tangled in the string and we found ourselves trying to teach him how to pull the string (a good skill, of course) rather than focusing on the object.

A better way we found to teach object permanence is to be very consistent in always placing Ivan’s toys in the same place. He quickly learned that his toy keys are always on the right-hand side of his highchair tray and would search for them there. This led directly to the concept that the toy keys are there even when he’s not. Creating a sensory play area is a great way to set up an environment where objects are always in the same place.

The most important thing to remember while teaching your baby these prepositional concepts is Don’t Get Frustrated! I know it can feel impossible sometimes, but they will get it eventually. And, as with any child, once they figure it out, they figure it out fast! One day your baby just won’t stick their hand in the box, the next day that’s all they’ll want to do. And concepts build on each other, so learning one helps them learn another. So good luck and keep working on it!

Understanding gross motor milestones for typically-developing children can help to determine if your child’s development is on track.

Is your child struggling to play with toys and use small objects? Read on to learn about fine motor activities for your infant or toddler!

Learn about social-emotional activities that will help your toddler develop the social and emotional skills needed to thrive in early childhood and beyond.