My child has LCA and presses her eyes. Is this normal? What can we do about it?

As the parent of a child with LCA I can tell you that yes, it is common for kids (and even sometimes adults) with LCA to press or poke their eyes. Below we’ve collected frequent questions and answers about eye pressing from parents of children with (and even some adults with) LCA. You can find more on the LCA Support group on Facebook. Hopefully this will help you understand what eye pressing is and what you can do about it.

Before reading all these questions and answers that have arisen over time in the group, I want to reiterate the basic message that comes up again and again: “Try not to stress about it too much. He/She will grow out of it, or not.”

When and why do people with LCA press their eyes?

Did you, or your child, stop eye pressing at a certain moment?

Can my child’s eye poking result in vision loss or damage to the eye?

No one really knows. The doctors/scientists all write a paragraph that goes like this:

The characteristic extraocular sign in LCA is Franceschetti’s oculo-digital sign, comprising three components: eye poking, pressing, and rubbing. It is not known why this behavior occurs. The major sequelum is enophthalmos, a physical defect in which the eye recedes into the orbit, presumably from atrophy of orbital fat. Keratoconus has been said to result from the repetitive trauma to the cornea, but others have suggested that this may be a feature of LCA itself.
(from GeneReviews)

Since so many people with LCA eye-press, it’s not clear whether the eye-pressing actually causes the cataracts or keratoconus, or if those things would have happened anyway without eye-pressing (just from the course of the disease).

Some parents worry that eye-poking affects their child’s vision. Below you can find a collection of parents’ or persons’ comments:

What can I do to help my child play independently without eye pressing? 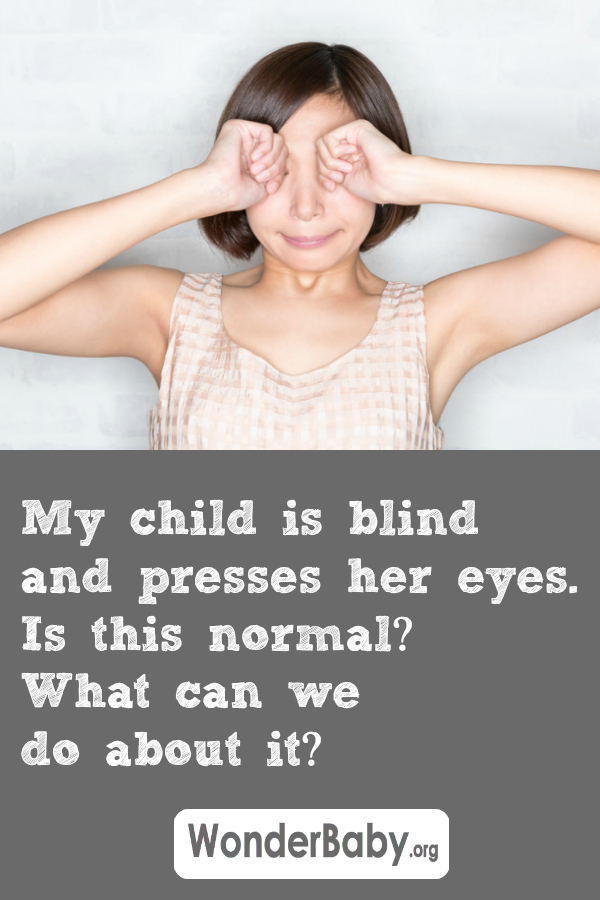 Feb 21, 2017Guest Post
What I Wish Someone Had Told Me When My Child was First Diagnosed with a DisabilityTransitioning Your Blind Child to Preschool