Transitioning Your Blind Child to Preschool

Sending your child to preschool is a huge transition for any family. It can be especially daunting if your child is blind. Typically motivating aspects of preschool—the colorful, cute classroom, the smiling teacher’s welcoming face and the excitement of being with other rambunctious children—are sometimes lost initially on a blind child.

This was no exception for our daughter, Ava, who was born in February, 2005 with isolated bilateral anophthalmia and in 2008 began preschool at the Western PA School for Blind Children.

When Ava was born, we realized that we were lucky enough to have a School for Blind Children less than 15 minutes from our home. During her first two years of Early Intervention, Ava reached basic mobility, speech and O&M goals in the safety of our own home. When the time came to make decisions about preschool, we knew that the School for Blind Children would be the best environment for Ava, but we wondered if they would be able to address Ava’s unique issues.

When we visited the school, we wondered how Ava would fit in and how her needs would be addressed. We wanted Ava to continue to grow academically, as well as to learn the necessary Braille, O&M and social skills that would prepare her for a typical kindergarten experience.

Ava started preschool just six days after her third birthday. We had attended her IEP meeting at the school about 3 weeks before, so we were well aware of what her goals would be. The first day was exciting and scary for all of us; my husband and I were asked to spend the entire day with Ava at school. We had talked to Ava for a long time about preschool, trying to prepare her for what was about to occur, but it’s not easy to explain the concept of “school” to a totally blind child.

When we arrived, Ava was immediately overwhelmed with the voices of the five other children in her classroom, which we expected. Her teacher had prepared the class well; she reminded them that Ava was new and that she might appreciate it if they spoke and sang softly until Ava became more comfortable.

We spent the morning holding Ava on our laps, mostly staying across the room from the other children as they participated in their normal routine of morning circle time, snack, and transitions into other activities. Ava enjoys music and singing, so we thought that if we recorded different songs throughout the day on her digital recorder, she could listen to them at home and learn them faster. 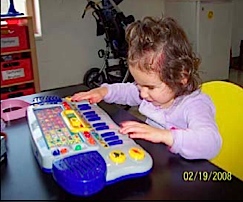 We figured out that most of Ava’s early frustration would come from not knowing what was going to happen next. She is such a typical firstborn child! Ava wants to be in control of her environment; she wants to know the words to every song, the directions of every activity and the steps of every process. This is also most likely a result of her blindness. Her world is largely unpredictable and she prefers very much to stay in her comfort zone.

Surprisingly, by the time lunch was over, she was moving closer and closer to the other kids and her teacher suggested that we go across the street to the main school building and have something to eat while Ava stayed and listened to a story. I thought for sure that she would cry the whole time, but when we came back and peeked in through the doorway, there she was, sitting in afternoon circle as quiet as a mouse. She looked comfortable and confident! This was the only time that I shed tears that day—I was so proud of Ava!

I can honestly say that during that first month of preschool there were many more good days than difficult ones. For the first two weeks, I was able to spend time each morning at the school, getting to know the routine, the other kids and Ava’s teacher, aides and therapists and just being there to comfort Ava.

To begin with, Ava attended preschool only three days a week, a decision that I made before she began and stuck to for quite a while. For a three-year-old who had previously spent every day at home, 40 hours a week at preschool just seemed like too much. So, Ava would spend Mondays and Fridays with her 3-month-old sister, Lucie, and I, just playing and doing fun things.

One place where I did compromise was allowing Ava to ride a bus to school, provided by our local school district. I was determined to take her and pick her up every day, but with a new baby and a work-from-home career, it was just too exhausting for me. I was really scared to put her on the bus, but as it turns out, she likes it. One of the lessons that I learned about Ava during this transition is that, even though she can’t see her world, she will adjust to it and thrive in it—and yes, that means the world outside our little, safe home!

Looking back on our first month of transitioning from home to preschool, here are some key issues that all parents making this transition should think about: 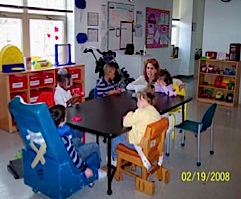 On a larger scale, this means choosing the right preschool for your child, especially if you don’t live near a school for blind children. What kind of environment will your child thrive and feel comfortable in? If your child attends a “typical” preschool, how will the school work to accommodate the needs and goals of your child?

On a smaller scale, the actual classroom that your child is placed in means a lot. For example, at the Western PA School for Blind Children, there were seven preschool classrooms, each very different from the next.

When my husband and I initially visited the school, we were concerned that Ava would be placed in a classroom with kids who were all nonverbal or where a teacher was primarily focused on life skills and not academics. The director of the school heard our concerns and placed Ava in a classroom with three mobile and verbal children and two children who were largely nonverbal and used wheelchairs. This was a wonderful combination for Ava, as she got to know the verbal children by their voices and the nonverbal children by the switches and electronic devices that they used to communicate.

Ava’s placement was in the most traditional preschool setting available at the school—they started each day with a morning circle, worked on the alphabet and phonics, created multi-sensory art projects, sang and read stories and practiced hygiene skills. Ava also received all of her therapies within the school day, in and out of her classroom. If your child has multiple disabilities, it might also be a good idea for them to be in a mixed environment with children who are up and down the spectrum verbally and physically. I noticed that the kids in Ava’s class who could speak often motivated the nonverbal kids to use their devices more to interact.

After I spent about three days with Ava at preschool, ducking in and out of the classroom as needed, I sat down with Ava’s teacher and said, “I think that Ava needs her own aide.” I wondered how she would ever move around and participate without someone to help her at all times. I was concerned that Ava was the only totally blind child in her classroom. The other three children who were mobile had enough vision to move about independently and the two aides in the classroom seemed to be pretty engaged with the two children who used wheelchairs, since they required so much physical assistance.

Ava’s teacher understood my fears, but quickly offered me her opinion: she was willing to devote a lot of her energy initially to Ava during the school day until Ava learned her way around, but that our ultimate goal for Ava was independence. Having her own aide would definitely make her more dependent. She wanted Ava to function on her own, especially since Ava was about to begin using a cane. When I think of my early request for an aide, I am so glad that Ava’s teacher put it to me straight. After only four weeks I could see that Ava did not need her own aide—she was becoming more and more comfortable with moving about and often used a little shopping cart in and out of the classroom to help her feel more comfortable.

Every day, Ava’s teacher would send home a folder that had some key details written about Ava’s day. The next morning, I would write a few things about Ava’s evening and morning in the space provided for parents and any special concerns or directions that I may have for that day. Ava’s teacher and I would frequently talk on the phone or by email and I truly do feel that all of the questions and anxieties that I had were addressed immediately.

Communication is key when making the transition to preschool. It calms the nerves of uneasy parents and helps the teacher and staff to know your child better. Because our children with microphthalmia and anophthalmia will have IEPs for their entire school careers, preschool is the best time for you to practice the communication skills that will help you to obtain what is best for your child. At Ava’s initial IEP meeting, her plan and goals had already been written based on her DART evaluation. (DART is an acronym that stands for Discovery, Assessment, Referral and Tracking and it is our local resource for eligible children, ages three to five, who have developmental delays or disabilities.)

Since we had so much involvement in Ava’s initial evaluation and great relationships with her Early Intervention therapists, we were fully prepared for what her goals would look like in preschool. However, should we want to revisit those goals, it is any parent’s right to request an IEP review at any time throughout the school year.

Check out IEP’s for Parents of Blind or Visually Impaired Children for more information about how to prepare for your child’s IEP. 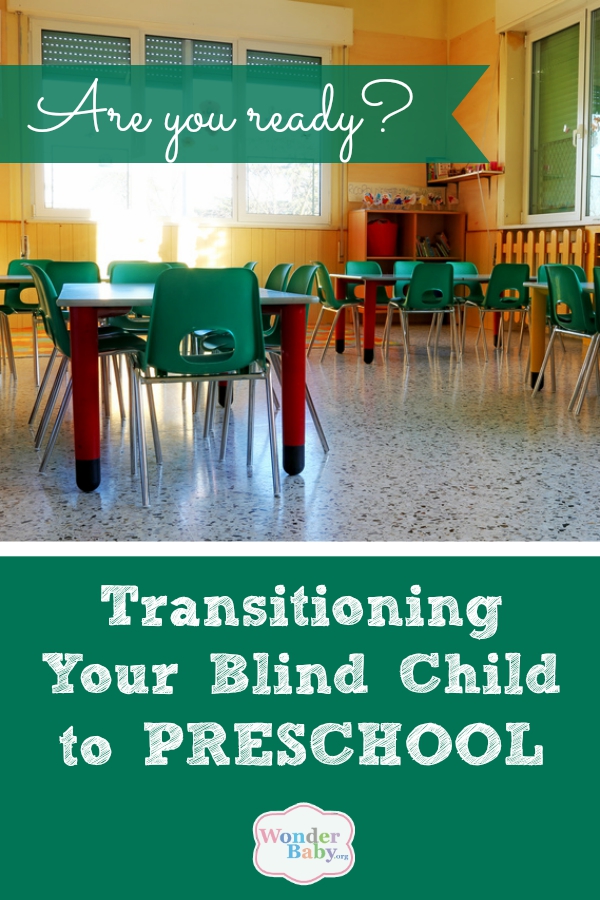 Cognitive developmental delays occur when a child’s thinking and reasoning are significantly below the expected average. Learn the signs and best ways to help.

The Impossible Dream, a universally accessible catamaran, travels the world creating access to the water for thousands of people with disabilities.