Memories of Growing Up Blind

Alysia is an adult that’s been blind since she was an infant. She writes a beautiful story about her memories of vacationing at the lake as a child.

Alysia describes the sounds and feelings she remembers from her childhood at the lake and explains how everything, from frogs croaking to water skiing, can be a learning experience.

When it is determined that the baby girl will be totally blind, the parents weep and pray for strength. The baby, who is just standing gingerly on her own two little feet, who is just beginning to reach for shiny objects, pointing and smiling at a vividly blossoming cherry tree, soon will be completely in the dark. In her daddy’s arms that hold her so close, she laughs and squirms. She doesn’t feel her daddy’s pain, only his love. Likewise, she doesn’t understand her mother’s sorrow, only her courage. The tiny, laughing, bouncy girl isn’t unhappy; she hasn’t learned to worry or fret, and she doesn’t succumb to despair.She never sees or hears her parents’ tears and doesn’t recognize the deep concern etched on the faces of her older brother and sister. She only responds to their familiar voices and welcomes their touch and their offers to play with her and show her games and toys.

Her hands want to explore everything. She is bright, inquisitive, and instinctively accepting of her reality. She knows nothing about her future and only lives in the moment. She has not seen long enough or clearly enough with her eyes to miss visual experience. She hears voices, footsteps, music, and other sounds in the house; outside, there are cars and planes and many other street sounds. She smells cookies and perfume, soap and carpets and furniture. Most everything has a scent. She touches her own hair, her mother’s face, her puppy dog, and plays her little toy piano. She wants to talk, to communicate, to be part of everything.

She is not afraid, and she isn’t traumatized. She moves forward tentatively, then more confidently. Her family is startled, then impressed. Our baby will have abundant life, they proclaim. Daddy praises God that the cancer which deprived his baby girl of her vision is now history. He does not question God’s wisdom and is blessed, is buoyed up by this vibrant child’s life! 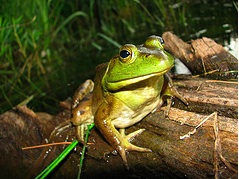 One day, the whole family visits friends who prepare a picnic near a beautiful lake; these friends stay there all summer long. The little blind girl, Alyse, is always curious. She squeals with pleasure when she touches the water in the lake and feels the gentle ripples. She hears a fish jump and then splash back into the water. When she hears a duck quack, she imitates it and laughs so loudly that everyone around her joins in. She learns that by moving her hands and feet, she can make the water splash and spray! This is a lake, a kind of paradise for her!As dusk arrives, it is cooler, and birds trill. Alyse knows about bird voices and smiles with delight. Before all the people go inside after the picnic, a new noise reaches Alyse’s open ears, a low calling or groaning, a bullfrog! She can’t imitate the frog, so she quacks. No, Alyse, it’s not a duck; it’s a big froggy! Now the girl knows the difference between the sounds a duck and a frog make, but she doesn’t know what the creatures really are. She has touched and played with dogs and cats and has many stuffed animals, including a seal with flippers, but she has not met a duck or a frog.

Alyse acquires more and more words; her newest word is lake, which she says as she nibbles her cereal the next morning at the family friends’ cottage where they are visiting for the weekend. Her obvious joy and the parents’ need for a permanent vacation location inspire plans to build their own cottage. The lake will mean freedom, relaxation, and recreation.Within a couple of years, the summer place is finished, and Alyse is walking and talking, running and skipping. The LAKE is there, and when Alyse steps out the front door and crosses the cement patio, it is eighty steps to the bank. For a while, she follows a path that is designated by a rope that she trails. The rope is attached to a bench in the front yard where she can sit, wait and listen for the lake. She understands that the lake is always out there directly in front of where she sits, but sometimes it is still and peaceful without a clue to its vastness. Near the bank, it is shallow and mucky. A wooden dock has been constructed which she can sit on and dangle her feet, but she is told never to venture into the water. She is an obedient child, but she can reach her hand into the water from the dock, and she might scoot on her tummy to the very edge of the water, even though she has been warned about splinters, so she can dangle her arms, too.

Alyse loves the lake and being near it. Their cottage is situated on a channel in the lake, and along both sides, there are neighbors with their own simple summer cottages. Alyse is beginning to know their voices, and she will call to the closest ones when she hears them outside. Hello, Joey; hi, Mr. Smith. They always speak to her cheerfully. Once in a while, she hears fishing gear and thinks about her grandpa who loves to fish! Then her grandma cleans and prepares the fish to eat. Alyse enjoys eating the fish, except for the bones, which are largely removed for her, but she grimaces when her grandpa lets her pet the fish. It is slippery and unpleasant to the touch.

Alyse can play alone in the yard, go inside for lunch, or bring a plate outside to eat at the family picnic table. She forms a picture in her mind of the yard and can find the rope swing her daddy has secured to the oak tree. She can carefully approach the lake and retreat from it without fear. Especially in the afternoons, the wind plays with the water and causes little waves. The sunshine feels warm, and she swings back and forth, singing to herself, liking the way her ponytail swings, too.An object comes into the family which makes the lake even more exciting! It is a motorboat! Daddy drives it, turning a wheel to direct it, and they bounce along across the water. Alyse always wants to sit at the side of the boat so she can welcome the wet spray that dares to wash her face and even her hair sometimes. The lake seems enormous, and other boats of all sizes and sounds zoom by. The water is deep, so the boat speeds or glides through the water easily. The air is wet and thick, loud and exhilarating! The lake has a sandbar where the boat can stop and rest; it is bound there, and daddy drops a metal anchor over the side, and it plops and sinks to the bottom of the lake where it holds and steadies the boat. The boat can rock and sway, but it can’t escape and float away. It reminds Alyse of her puppy, Cinder, who is sometimes on a leash and can’t run free. Alyse can climb out of the boat into a tube to float around. She can paddle and kick. Later, when she is older, her feet touch the sandy bottom under the water.

This lake has a public beach where people lounge and sunbathe on a grassy lawn. There are steps leading into the swimming area, and on either side of the steps, a seawall extends, endlessly, as Alyse imagines it. She examines the seawall with her hands and finds little snails clinging to it and also clams in their shell houses. A slimy clam might begin to emerge, but if Alyse taps the shell, it withdraws back inside, and its shell tightly seals shut! Alyse is taught to respect the clam’s need for security and does not try to pry the shell open. Also, her brother teases her, saying that clams have sharp teeth and will bite her.

Alyse’s experiences by and in the lake are pure happiness. She feels lighter, freer, and happier in the water than she does on land. The water does not hurt or cut her or make her fall. It is soft and responds to her movements; it calls to her and speaks to her as it laps against the bank or the boat. She learns to swim on top and under the water, trusting her control. The water is kind and protects her. She can jump, float, and do somersaults. She revels and bounces, drifts and seeks out warm and cool currents in the lake. Water on her skin is calming and comforting!

She wiggles her toes, tumbles, and sometimes sips the water though she has been warned not to! She slaps the surface and kicks her feet hard to stir it up. She lacks fear, and soon she will be taught to dive, head first with her hands clasped together, arms straight and head tucked to her chest so she will break the surface smoothly to avoid a painful and embarrassing bellyflop! Climbing out of the water is interesting, too, feeling the drops scurry, then trickle down her body and ruffly swimsuit. She informs her mother that she doesn’t want to dry herself with a towel so she can remain wet, especially when the summer sun is hot! If a thunderstorm develops, everyone must abandon the lake and go inside to be safe. 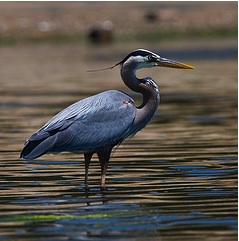 Alyse does have a healthy fear of lightning because she has been told it burns like fire! However, after the storm, the lake smells fresh; it is serene. She imagines that she is a fish or a seal, or maybe a blue heron.

Mother and daddy have taught her a lot about birds, because she loves the sounds they make, and many live and nest around the lake. Though she can’t see the birds, her sister shows her feathers and statues of different kinds of birds. Her sister designs birds out of paper and clay, and Alyse wants to do that, too. She can hear some birds fly, flutter their wings as they approach the bird feeder. Sometimes their beaks tap on the feeder as they remove the seeds and crack the shells. Alyse loves the soft feathers; she explores their size and shape and keeps them in a shoe box. Some day, she wants a canary, a parakeet, or a parrot. Yes, some day, her mother promises, dubiously. Alyse soon pets a smooth wet duck who lives at the lake and has been partially tamed, but it is not a pet. By the time Alyse is five years old, she knows the songs of a robin, a cardinal, house wren, mockingbird, woodpecker, crow, and red-winged blackbird. At night, she strains to hear the hoot owl or the haunting whippoorwill.

Alyse continues to love and trust the lake. She will learn to water ski, attached to the boat by a taut or slack rope. The water flows on either side of her as the boat forges ahead. She can zoom over the wake and propel herself into quieter water, but if many boats are active in the vicinity, the water will be choppy, and she can lose her balance. After the energetic exercise of skiing, Alyse will sleep soundly and deliciously, dreaming about the wonderful lake she loves, like a best friend with an open heart.

Feb 23, 2007Guest Post
Make Your Own Sensory Play Area for Your Blind BabyWhat's an ERG?