When Abigail was born my heart was filled with such joy, and so many other feelings that can only be summed up with two words… Unconditional Love!

When I fell in love with my husband, Jonathan, I couldn’t believe I had such strong feelings for him, and I was sure I could never love anyone as much.

Then almost a year after we were married our angel, Abigail Cindy Lee, came into this world.

Her eyelashes were long and beautiful… and her toes and fingers were delicate and soft and, well, she was perfect! She is perfect!

Every day since she was born, my little Abby has been a shining light in my life. On the worst of days it only takes her smile and the light in her eyes to cheer me up, and on my best days she’s the icing on the cake.

At three months old I noticed she never seemed to be looking at anything or anyone. My mother was concerned for Abigail and kept asking me if I noticed something was wrong. Abby was born three weeks early and so I assumed she’d catch up. However, as I read and researched more about infant eye development, I learned that she should have been able to at least see in front of her from four weeks and on. I began to worry, but prayed that things would change by her four month check up.

When the time came our doctor evaluated her and as always was impressed with her rapid growth and bubbly personality. I mentioned to him our concern for her eyes and he suggested we go see an eye doctor.

A couple weeks later I received a phone call saying Abigail’s appointment would be for May 16th. Well, at the end of April she was officially five months and I began to see that not only was she not seeing my husband and me, she wasn’t even reacting to light.

I called and called the eye doctors to try and reschedule for an earlier date. I was told over and over again that they were booked and it wasn’t going to happen. Well, God must have heard my prayers because we were put on the cancellation list and were the only ones on the list. So when someone cancelled their appointment we got bumped up to May 7th.

We had one week until her visit and each and every day a still, small voice would tell my heart that Abigail was blind. I would ignore it, but would eventually find myself in tears when my husband walked through the door. He kept reassuring me that nothing serious would be found. But in my heart I knew that was not true.

The morning of May 7th, 2010 came and we anxiously prepared ourselves for the appointment. We got Abby dressed and her diaper bag packed, and we packed our hearts and souls with faith and prayers.

The wait was not too long and Abigail was asleep for most of the initial check up with the nurse. The doctor finally came after what seemed an endless wait. She had me sit in a huge chair and hold Abby as she made noise and tried to get her to follow a toy. Then the doc shined a bright light in Abs’ eyes and as I watched, what I saw confirmed what I felt. Her eyes wouldn’t even blink and her pupils did not even dilate in the slightest. I knew my little angel girl was blind.

Some eye drops were put in her eyes, so her optic nerves could be seen. We had to wait thirty minutes for the drops to take effect and dilate her pupils. Once we went back the doctor looked deep past Abby’s ocean blue eyes as if she was searching for buried treasure. Dr. Kathy sat back in her chair, sighed, then started to scribble like mad on her chart. I looked at Jon, who was looking at me with that same look which seemed to say, “Oh no.”

After a few silent moments the doctor told us that Abigail’s optic nerves were ten times smaller than usual. She called it Optic Nerve Hypoplasia (ONH) and said that it would be a struggle for the rest of Abby’s life.

I was shocked at the lack of information she was giving us. This woman did not want to be the bearer of bad news. Jon pressed her with questions over and over again to try and understand what ONH was and if Abigail could see. After ten minutes of drilling Dr. Kathy we discovered that Abs was blind and that there was little chance of her gaining any sight. Shock set in and acted as an umbrella, preventing any tears from touching me.

We were also told that several other problems could come along with ONH and that Abigail would need an MRI to scan her brain. I felt certain that the MRI would come back perfect. After all, aside from not seeing, our daughter was bright and bubbly. 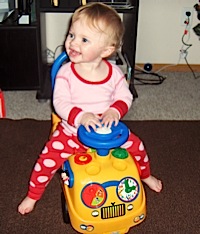 It only took two weeks for the MRI to be scheduled. We had to be at St Luke’s Boise at 9:00am sharp. We got there at 8:30am. After registration we were taken to the sedation area for children. There Abs’ vitals were checked and she was evaluated by a doctor. All the nurses loved her! They kept commenting on how beautiful she was and what a happy baby she was.

Lying on the hospital bed and in her little hospital gown, I saw for the first time that my baby was not a newborn anymore. The nurses smiled as they rubbed special “numbing” cream on Abby’s hands and feet so they could thread a needle in for fluids and the sedative.

The cream had to sit for thirty minutes for it to take effect. It stayed on for about forty-five minutes. Jonathan and two nurses held Abigail down as the RN prepared to thread the needle and line. Abs laid there smiling as if they were playing with her. Once the RN stuck Abby’s foot, Abs began to scream and tears flooded her face, running down her little neck. My heart broke and it took all I had to not tell them to stop.

The needle wasn’t going through so they had to go for her hand. I left the room but as I heard her cry I had to go back in and be there for my baby. I rubbed her head and sang to her as the nurse tried a second time to thread the line in my daughter’s little vein. Finally it went through and the worst was over.

After Nurse Danny strapped Abigail’s hand to a pillow and secured the line, I picked my baby up and held her close to me. I sang her favorite songs, and caressed her wet cheeks, until she fell asleep, pressed warmly to my chest.

Danny came back in and said that MRI was ready for us, and commented at how much of an angel Abs was sleeping in my lap. We laid her on the hospital bed and Jonathan and I walked hand-in-hand down to the MRI area. We followed the nurse into a room where we watched her give Abigail the sedative. I saw in my husband’s eyes a deep love and concern for his daughter, his little bugaboo. The MRI team came in and said it was time to take her and that Jon and I would have to wait in the waiting room.

As we walked out my heart was screaming to me to follow them. Jonathan suggested we head down to the cafeteria to eat and pass the time. Sure enough after we were done eating it was already 11:30 am, only thirty minutes left at the least. We walked back up to the waiting room and started watching TV. It seemed we had only been there for five minutes, when I looked up at the clock and noticed it was 12:10pm. I heard a soft little whimper and I knew it was my baby.

I jumped up and Jon and I walked out and there was Abigail, fast asleep, singing her usual tired sonnets. The nurses told us that she did great and again said what an angel she was. When we got back to the sedation and recovery room I held her once again close to me so she could my heart beat. I wanted her to feel and to hear the love I had for her.

Nurse Danny was giving us the low down of the side effects of the sedative they used. She said that Abs would be tired, listless, and would sleep all day. Danny assured me that Abigail would not be herself until the next morning.

Well, Nurse Danny had to leave and another nurse named Peggy came in to take over. Nurse Peggy continued to say the same things. And after waiting forever for Abigail to wake up she gave us a little two ounce bottle of sugar water to feed Abby. After the water our daughter was awake and going full throttle. She was kicking her feet and smiling. Instantly she wanted to sit up and play with her toes.

Nurse Peggy looked at her and simply said, “Huh, that’s not normal.”

I thought, “Of course it’s not normal, my daughter is exceptional!”

We were discharged late in the afternoon, and went home with a happy baby. All night, she played, talked and giggled as if she had never been to the hospital at all. I eagerly awaited a phone call from her doctor with the results of the MRI.

It wasn’t until the very next day, Friday, May 7th, that I got the call. It was from Dr. Kathy, the eye doctor.

She said that Abigail had Septo Optic Dysplasia (SOD); a disorder that came along with Optic Nerve Hypoplasia. Apparently, there were several areas of her brain there were underdeveloped, and one part, that sends the messages from her brain to her eyes, wasn’t even present. I was told that Abigail would need to see a pediatric neurologist and an endocrinologist.

The pediatric neurologist is to determine the severity of her blindness and what chances her optic nerves have of developing. The endocrinologist is to follow her through her childhood and watch her growth and development. Children with SOD often have several disorders which causes handicaps and mental disabilities. She also has a chance of getting some form of children’s diabetes that causes her to constantly be sick and not able to go outdoors.

We won’t know the extent of everything until those two doctor appointments. Still, the information was twice as hard to take as when we heard she was blind.

Through all of this Jon and I were praying for a miracle. I was angry with God, because I thought after everything I went through, that my children would at least live a normal life. After the first appointment I was angry and after the MRI results I was even angrier. Where was our miracle?!

Well, last night, as Abigail laughed and played with me, I looked deep into her bright blue eyes and saw her beautiful spirit. I knew right then, that she was our miracle. I know that, because of my past, I will have the strength, the compassion and the love to be the mother she needs on this earth.

My only question I have for God is, what does He see in me to charge me with such a valiant spirit? Only time will answer that for me.

For now, I am going to love and cherish Abigail, my miracle.

Learn more about Abigail and her mom, LeAndra, at LeAndra’s blog, Dear Abby. But beware, the cuteness of Abigail may be overwhelming!