Unified English Braille: What Every Parent Needs to Know

January 4, 2016, is the start date of the Unified English Braille (UEB) code to become the official Braille Code in the United States. This is the date that the transition to UEB should be completed for schools and organizations nationwide.The Braille Authority of North America (BANA) decided in November 2012 to make the transition to UEB from English Braille American Edition (EBAE), with an original proposal memo dating all the way back to 1991! Many braille readers, parents and teachers may be wondering how the change will affect them. This article will help familiarize you with the details of UEB, making the transition, and where to find help if you need it.

UEB is the acronym for Unified English Braille, a simplified Braille code for letters, numbers, symbols, letter groups and words. Although its Uncontracted Grade 1 system is the same for the alphabet, the symbols differ from the English Braille code currently used in the US. However, the Contracted (Grade 2) UEB code differs from the English Braille code much more, making many previously printed Braille books obsolete. A summary of the differences is explained below, but you can find details regarding the complete changes along with explanations on the BANA website.

If you’re not already familiar with Contracted Braille, you should first know that it is a way to save space by using a system of specified contractions that can stand for letters, groups of letters or partial words (such as suffixes and prefixes), words, and symbols. You can view a PDF of every UEB contraction on this cheat sheet from Duxbury Sytems: UEB Braille Chart. Print out a few to keep around your desk or classroom to refer to while helping out with reading, homework and transcribing materials! (I’ve also found it handy to bookmark on my iPhone and iPad, as well as saving a copy to iBooks so I can find it quickly wherever I am!)

A summary of changes:

This list is more fully explained on BANA’s website in the article, Overview of Changes From Current Literary Braille to UEB, and should be referred to for complete details on why the change was implemented as well as how to implement each rule appropriately.

Why change to UEB?

Many have questioned the change to the new Braille code, mostly because of the time, costs and effort it is taking to make the complete transition. The transition affects many children, students and teachers, as well as businesses who produce Braille. However, the UEB Code has already been adopted in many countries around the globe including the UK, Australia and New Zealand, with a majority of Braille readers very satisfied with it! It seems that the few changes are enough to make it much more preferable over previous codes.

You won’t have to make any changes to your iPad settings if you’re using a refreshable braille display. Just make sure you have the following set in your Accessibility Settings:

To ensure you have the correct settings on your iPad or iPhone, go to Settings > General > Accessibility > VoiceOver > Braille. The settings for “Braille Display Output,” “Braille Display Input” and “Braille Screen Input” should all be set to “Contracted Braille.” If you are one of the states continuing to use Nemeth Code, be sure to switch the “Equations use Nemeth Code” switch to “ON.” Lastly and importantly, the “Braille Translation” setting should be set to “English (Unified)” unless you are in the UK, in which case it should be set to “English (United Kingdom).” 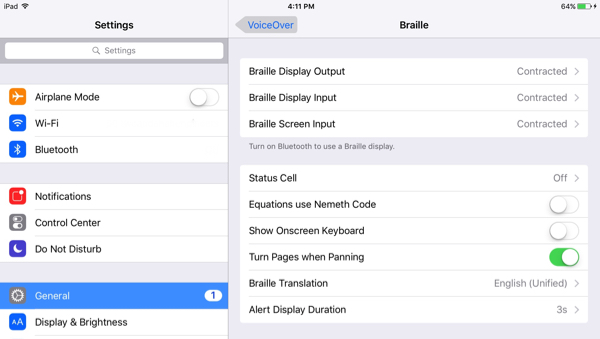 How will the transition happen?

It’s actually already happening and should be finished by January 2016 in most cases! Each state is responsible for implementing UEB within its borders. Teachers of the Visually Impaired (TVIs) have been working to become experts of the new code and how to effectively make the transition for their students. A major concern among teachers and parents is how students who have already learned the old Braille system and its rules will adjust to learning the changes necessary to read and write with the updated UEB code. One exception to the 2016 date are state-wide assessments. For example, according to Ohio’s State Transition Plan, the state will continue to produce state-wide assessments in both EBAE and UEB through 2018 to include both students who have learned UEB and those who originally learned EBAE and are making a true transition to UEB over the next two years. 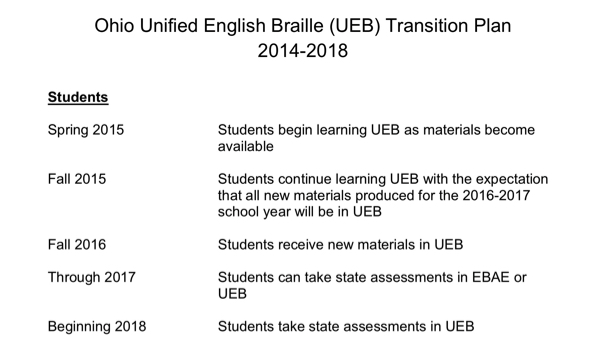 What about Nemeth Braille Math Code?

That’s the new million dollar question! For now, the answer is that each state will decide the fate of using Nemeth Braille or transition to the UEB Math Code. One important factor to consider as far as a universal standpoint is that the United States is the only country using Nemeth Braille. The other countries who now use UEB also use UEB as their number and math code in math and science technical materials including textbooks and research materials. Some people however are advocating to keep Nemeth Braille including the National Federation of the Blind whose President Mark Riccobono has issued a letter to each state’s Department of Education. This letter can be viewed on the NFB website here.

Many companies are making statements supporting the change to a unified code. For example, National Braille Press, a producer of Braille books and materials, has put out the following on their website:

“As individual states begin to develop their own implementation plans for UEB, NBP is concerned that the use of two different codes (UEB and Nemeth) for technical materials such as math and science will significantly impact students across the country. Two technical codes will cause uncertainty and confusion for braille readers and will affect the future of braille. Having a nationally unified approach to math and science is essential. There is already a scarcity of resources, training, and teachers of the visually impaired in our community, thus a uniform, efficient transition is critical to support braille literacy.”

With this said, National Braille Press also pledges, “to continue producing braille in any code required to make educational materials accessible to ALL braille-reading students.” This pledge ensures that students who may continue to need materials in English Braille American Edition after January 2016 will be able to through NBP—a big commitment from NBP in promoting Braille literacy! Read the entire statement from NBP on their website.

So what are your thoughts on which code the United States should use for mathematics, or should both codes continue to be used? You may find this thread on Paths to Literacy interesting where a user posed the question and many have responded with varying opinions and good points, too!

The transition to UEB is a promising step forward for the US. Let us know what you think about the switch as well as the pending mathematics code question in the comments section below!

Where to find more information: 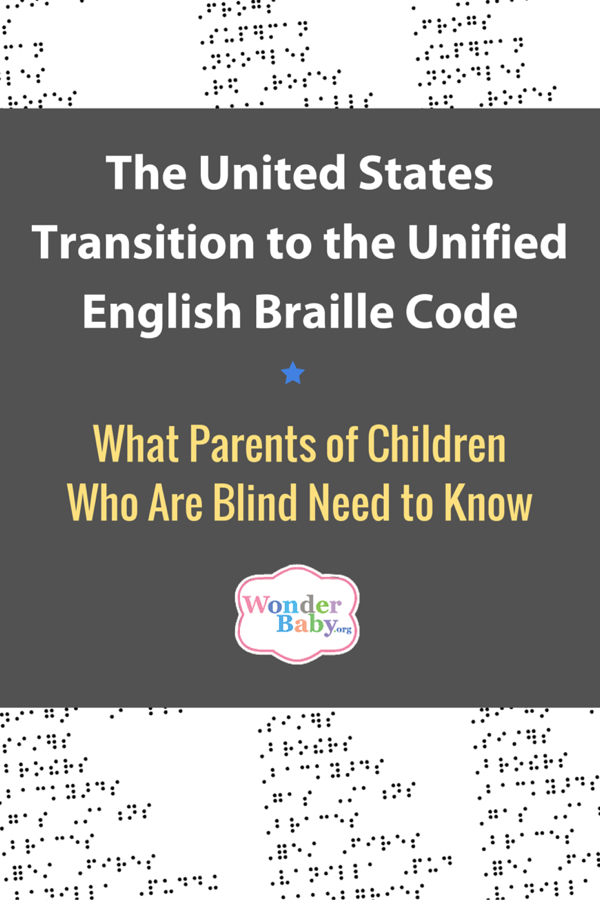 Living Paintings is a Uk based charity that designs, creates, and publishes Touch to See books for kids who are blind.

Reader’s Digest Partners for Sight is dedicated to fostering the independence of people who are blind and visually impaired.

How to Teach a Child With Dyslexia

Dyslexia can be challenging for kids and parents, but there are ways to teach a child with dyslexia to help them achieve their literacy - and life - goals.