The developers at EDA PLAY are back with two new apps for kids with visual impairments! EDA PLAY TOBY (read our review) and EDA PLAY PAULI invite kids to play through an engaging series of scenes full of bright simple pictures and fun sounds. The simplicity of the EDA PLAY PAULI app is a beautiful counterpart to its more complex progressing storyline. Overall, it’s a highly motivating and interactive app for kids!

EDA PLAY PAULI is designed as an interactive story about a little girl named Pauli. It starts out at the beginning of her day when the user is invited to ‘find’ the cockerel (a rooster) and have him call the sun to come out by tapping the screen. Kids of all abilities will love the cause-and-effect structure as they’re rewarded for the efforts with fun, clear sounds and congratulatory remarks for a job well done!

The story continues as Pauli gets out of bed and ready for the day. Players follow along with Pauli, helping her complete tasks by tapping the screen. A narrator tells about each scene and prompts the child to tap the screen with reminders if no activity is being received. The story of Pauli’s day helps build children’s comprehension, sequencing and executive functioning skills through an interactive, clean approach.

Each scene of the story requires the player to tap once on the screen to reveal a picture or complete a task. For some scenes, the player will be prompted to tap again and again to solve a puzzle like stacking blocks or reveal a large picture piece by piece. However, the user may still tap anywhere on the screen rather than one specific area, which could be harder for those with motor control challenges. 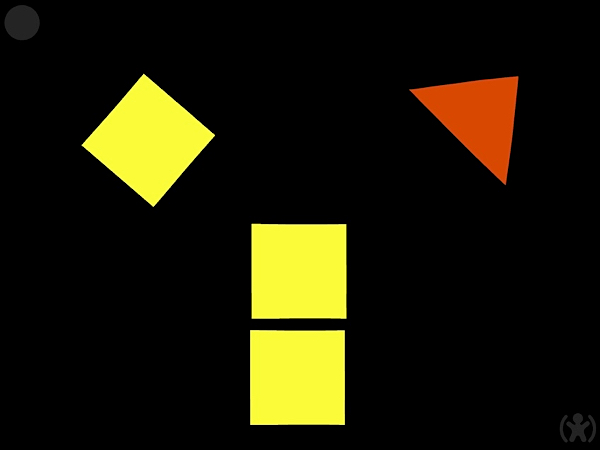 Kids will enjoy playing the app over and over again since there are so many scenes to go through in the story- 31 to be exact! However if this is too many for a child, then you can easily adjust the settings to exclude some of the scenes and shorten the story. That way the story can still have a beginning, middle and end, but it won’t take as much time to complete. The developers at EDA PLAY realize the unique needs of our kids and have built in several customizable options to make EDA PLAY PAULI perfect for everyone.

The EDA PLAY PAULI app includes two parent-protected buttons to access the ‘Settings’ and ‘More Information’ details for the app. The top left button is activated with a long press by the user (about 3 seconds), allowing parents to include or exclude any of the 31 scenes in the story. You can also change the language between English and Czech.

By conducting a long press on the button in the bottom right corner of the screen, the user can open the ‘Main Menu’ comprised of three large buttons: Info, Settings, and Skills. The Info button provides detailed information on How to Play, About, and even a Simulator of Visual Disorders including Scotomas, Nystagmus, and Hemianopia. The Simulator is a great unexpected bonus! 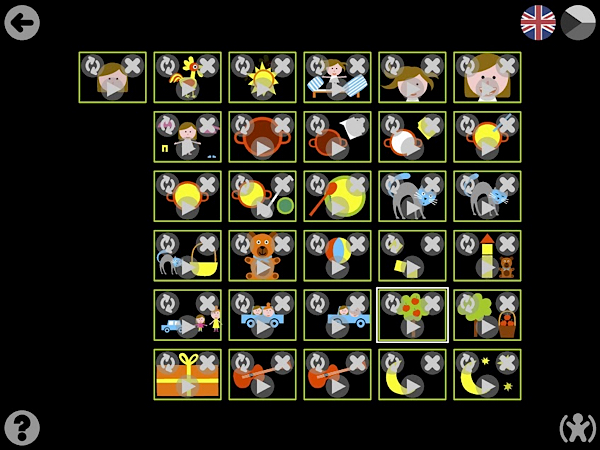 The Settings Menu allows the parent to turn on/off several functions of the app, including: Audio Guide, Sounds Effects, White Frame, and Skills Recording, as well as adjust the Brightness. The Skills button brings up an easy to read synopsis of the child’s use of the EDA PLAY PAULI app including the total time played, number of tasks completed, and total number of touches. It’s organized by date so the parent can track the child’s progress in these areas over time. If you’d rather not track these skills, it can be turned off, however this information is not shared outside the app for parent’s questioning a privacy issue here.

EDA PLAY PAULI is a wonderful app that motivates kids to practice fine motor skills and visual skills. The colors, motions, and sounds make it perfect for kids with Cortical Visual Impairment (CVI), especially when they can be customized to fit the child’s needs. EDA PLAY has added yet another tremendous app to their iPad collection! 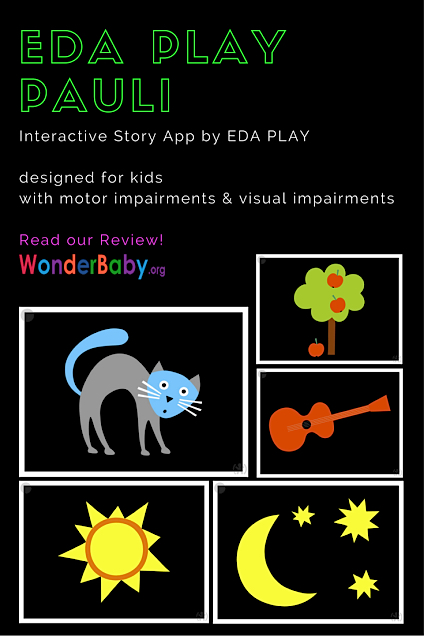 Jun 1, 2016Hillary Kleck
Hand Use While Walking: Helping Your Child Who is Blind Understand His HomeEverything You Need to Know About Goalball for Visually Impaired Athletes