Price: $1.99
Where to Buy: Find Peek-a-Bouncer at the iTunes Store (as part of a compilation)
Developer: KneeBouncers
Devices: Compatible with iPad, iPhone, iPod Touch
Operating System: Requires iOS 4.3 or later
Categories: Cause & Effect 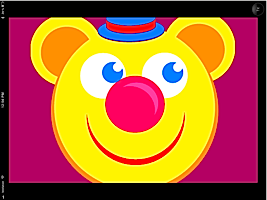 In detail: Peek-a-Bouncer is a simple cause & effect app where the user of the app touches-and-holds the screen (cause) and gets to enjoy the silly faces and funny things they say (effect). As long as your child keeps their finger(s) on the screen the silly animal remains on the screen.

This is one of those apps that is entertaining while at the same time it teaches your child one of the fundamental skills of iPad use. Peek-a-Bouncer teaches your child to touch the screen with a finger and hold it down for a period of time. If the screen is simply tapped and then released then the green curtain closes up before revealing the silly face behind it.

Kids who spend any time with an iPad generally pick up these basic skills, among them being the single tap, the double tap, touch-and-hold, the finger swipe, etc. People with limited experience using touch screens might take additional time and training to get the ins and outs of these kinds of gestures. This app effectively teaches children the important skill of touch-and-hold. 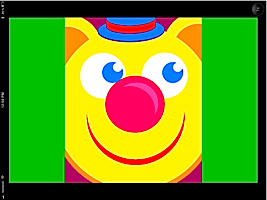 The appealing thing about this cause & effect app is that it is so simple in design and it works very well for children with visual disabilities and/ or cognitive disabilities. The silly animals that appear behind the curtain, are mild-mannered, slow moving, slow talking and drawn simply which makes them more accessible for children who have vision impairments.

This app can be enjoyed by children who are blind as they can hear the funny things the animal say when the curtain is opened with a touch-and-hold.