Welcome to SCIVIS, Space Camp for Interested Visually Impaired Students. SCIVIS is a week long camp that takes place at the U.S. Space and Rocket Center in Huntsville, Alabama, coordinated by teachers for the visually impaired and is accessible to blind and VI students through adapted speech, large print, and/or Braille materials.

Two young men from the MAPS community had the opportunity to attend SCIVIS a few years ago. Both Matthew Alvernaz and Jason Polansky have bilateral anophthalmia. Here are their reports on attending Space Camp: 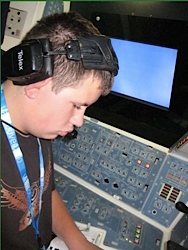 Hi, my name is Matthew Alvernaz, and I would like to tell you a bit about my experiences at space camp in Huntsville, Alabama. It took quite a long time to get there. I live in Vancouver, Canada, and we had to take three airplanes, but it was totally worth it because of all the extremely fun things we got to do when we arrived there!

We got divided into random teams. I got to do missions with my team, some didn’t end up working out, like once when we landed our ship while the doors of the ship were still open! We also got to try some space simulators, like moon gravity simulators and other fun things. We made rockets and launched them into the air, mine didn’t really go anywhere though. We played games, went swimming once and did a lot of things that kids do at camp.

I met tons of kids from many different places in the world, we traded pins and badges. I totally recommend that if you can you should go as this camp is really awesome. I can’t wait to go again another year! 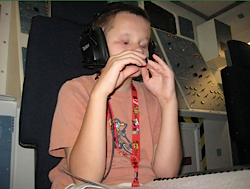 Hi, my name is Jason Polansky. I live in Thurmont, Maryland. I had a wonderful time at space camp. One of the favorite things we did was launching a rocket. We had a kit that we put together to make a rocket. Then we took it out into a field and put it on a miniature launch pad and launched it.

Another thing I liked was our pretend mission. We went on a model of a space shuttle and had a script that we followed. I got to be a mission specialist, which I liked because it was hands on, and I like to do experiments. We had to put a new battery in the Hubble Space Telescope.

I won the Max Carpenter award, which is a very special award given to somebody who has a positive attitude and portrays the spirit of space camp. Max Carpenter helped to start SCIVIS when there were only twenty kids and now it has expanded greatly to about 180 kids. Every year they give an award in honor of him. I got a plaque and we hung it up in my room.

Those are some things that I enjoyed about space camp, and I hope to go back again!

For more information about SCIVIS, visit www.tsbvi.edu/space. You can find out when their next camp is scheduled and how to apply on their website. And as an alumni on the SCIVIS website says:

“Just because I can’t see the stars, doesn’t mean I can’t reach for them.”

Want to see what space camp is really like? Watch this video below: 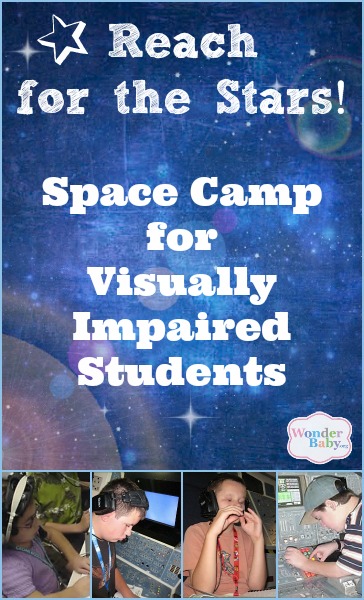 20 Best Science Projects for Kids of all Abilities

All kids no matter their abilities or disabilities are curious and natural science learners!