Is My Blind Child Autistic? One Parent’s Experience

Is it sensory overload, social anxiety... or more?

[Editor’s Note:] As we’ve worked over the years to find an accurate diagnosis for our son, Ivan, we’ve had numerous doctors and therapists mention autism as a possibility.

It would have been easy to settle for that diagnosis, but in the long run would have led us to unsuccessful treatments. It can be hard to differentiate between autism spectrum disorder and blindisms or other neurological disorders, but as parents we need to keep searching until we’re sure we have the right answer. And yes, sometimes autism really is the right answer.

Mary’s experience with her daughter, Elizabeth, is different than mine with Ivan, but is just as common a scenario. If you’re also struggling with this issue it may lend some much-needed perspective.

I can only ever write about my experience with my child and I always write from that perspective first. In this article I would like to address the relationship between blindness and autism, but I do not wish to step on any toes or take issue with what another parent has experienced or lives with daily.

My daughter, Elizabeth, was born with OCA1a type albinism. That’s the one with the beautiful white hair and the visual acuity that can range from almost normal vision to legally blind.

When she was born, she behaved as a blind child because that is what she was. It is said by people with albinism that their eyesight is never worse than the day they were born and she was no exception.

There was strong hope from medical staff that her visual acuity would improve, perhaps even dramatically, but still we had a blind child. She did all the things that a child without sight would do:

We let her call the shots for a while and live a life with no stuffed animals and no sitting up. Then we said, “Enough!” Every child needs challenges and we found them for her by the spadeful.

We bought a toy that changed her center of gravity when she moved, something very similar to the Bilibo; We insisted that she sat up to become part of the company; We persisted in ways that make me tired to remember them now!

And her eyesight became very slightly better not through anything we had done. It was just time and nature. But still she was delayed. She didn’t crawl, for example, and why would she? She couldn’t find anything except by chance or follow anyone, so why crawl?

Then she realized that people were sitting up from the floor and in order to get to them she had to stand—so she did. And that was all she did. The bare minimum: Stand! (That’s my girl!) 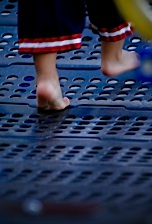 Photo by The Busy Brain

When she was about two years old—just about the time mummy was about to go bald with worry—she walked!!! Yep, just like that she got up and walked five steps across the floor—no big deal apparently.

And then she started rocking—on every surface, in every room.

And climbing—my fears for her safety still elicit a sort of “cute contempt!” from her. At her nursery she was a “known risk taker!”

And she still wasn’t talking, or laughing, but she smiled occasionally—and it was like the sun coming out!

She went to nursery at thirty months and she was still almost mute. We were offered an MRI by a pediatric neurologist because by this stage, even her ophthalmologist suspected what he called “an additional diagnosis” but we turned it down because of the dangers inherent in general anesthesia. If there was additional neurological impairment we’d find out soon enough, we reasoned.

But the waiting was not easy.

By this point in the story I’m sure you know what we were worried about. How do you tell the difference between eye-poking attendant to a blind child stimulating the optic nerve and eye-poking of a more self-injurious nature, which is a facet of autism?

Elizabeth began talking when she was about two years and nine months old. It was very sudden, and it was in sentences!

She was always a child with very well-defined wants and needs but she developed into a child who could only do certain things in one particular way. For instance, when I was reading a book to her, I had to say the exact words I had used the first time I had read her the book. She could brook no deviation in the storyline, and her little hand had to follow the story (they were all “touchy- feely” books) in the specific order that she had prescribed.

She had a set of conditions for almost every daily event. And her routine was relentless. She remained a placid, easy-natured child but became acutely distressed if her routine was messed with.

This routine was not to be confused with her perceived “order” of things, though. Books went in straight, very straight, lines. All over our sitting room the floor was often covered in her perfectly horizontal books. Long before she had expressive language, she had a developmentally advanced and intuitive understanding of numbers, shapes, and angles.

She also behaved as though particular people were not there (to be fair, she still does this; she doesn’t actively dislike anyone, but she only makes an effort to “see” people she is interested in. It probably goes without saying that her taste in people can be described often as, at the very least, eclectic).

And then the echolalia almost brought us to our knees —I am not over dramatizing this and if you’ve survived it yourself, you’ll know that.

Do you see where I’m going with this?

All of these natural behaviors that can be explained by blindness can equally be laid at the door of Autistic Spectrum Disorder.

And I had seen all of these symptoms before —in the patients I had worked with at various hospitals; the patients with autistic spectrum disorder.

Our G.P. should receive an award for her patience, thoughtfulness, and genuine interest in the development of our daughter and her utter kindness with us. Time and again we went to her with another piece of the puzzling behavior we were witnessing and time and again we left her surgery with our minds, at least temporarily, at rest.

Every single time, she asked us if our daughter was disinclined or distressed by physical contact with us. Each time we replied that she was easily startled, which could cause a degree of distress, but seemed to love physical contact —with just about anyone!

If we had misinterpreted the vulnerability our daughter felt when she was touched —suddenly, from her point of view —then we could easily have rationalized that human contact was unpleasant for her. Instead of becoming practiced at saying things like “It’s mummy and I’d love a cuddle” so she could anticipate the event, we might have pulled back from touching her because it “seemed” to be upsetting her, and this would in turn have meant that she became less practiced at responding appropriately to human contact.

We watched her in her almost constant rocking—and one day realized that she was checking every inch of every floor for squeaks!!! She knows our home in a completely different way to the way we do — naturally!

We have been consistently blessed by the quality of professionals surrounding our daughter and helping us help her. It was the Headmistress of the nursery at which our daughter had a Special Needs Placement who made this most comforting, almost magically reassuring of statements: “This child has an idiopathic learning process and we must alter the way we assess goal attainment in order to accommodate it.” In other words, Elizabeth is responding to the world as a blind child and an individual and we must take that into consideration when assessing her.

That was the thread that we wove around our fears, eventually stifling them. And in retrospect, it seems so obvious —how could we not have realized that, because her experience of the world was so different because of her lack of vision her learning would take a different path to get her to the same place?

Some children, just by virtue of chance, are blind or severely visually impaired and also have ASD. I am not saying this lightly, but to emphasize the unlikely matches that nature produces, for instance, some children are born with Downs Syndrome and Albinism. It is very unlikely, but it happens.

Unlikely things happen every day and my experience with my daughter could have had an altogether different outcome. It is also possible that if I had not had the quality of professionals around me, I could have believed what seemed to be the evidence of my own eyes and begun strategies, which would have, in the longer term, been profoundly detrimental to my daughter.

Elizabeth is now in her first year at a mainstream school. She requires special consideration and equipment to diminish the effects of her severe visual impairment.

I would also insist that she truly needs the attitudes of the people working in that particular school who have embraced an attitude of self-education and open mindedness with regard to giving our little girl the very best educational start. Our thanks to these people are redundant—they have this attitude because of their own experience, learning, and personalities and Elizabeth is thriving.

But I could have made an irretrievable mistake with the very best of intentions. Both my experience and the research I’ve done suggest to me that it is absolutely incumbent on us, as parents, to consider our children’s perceptions before we label their box and shut the lid. 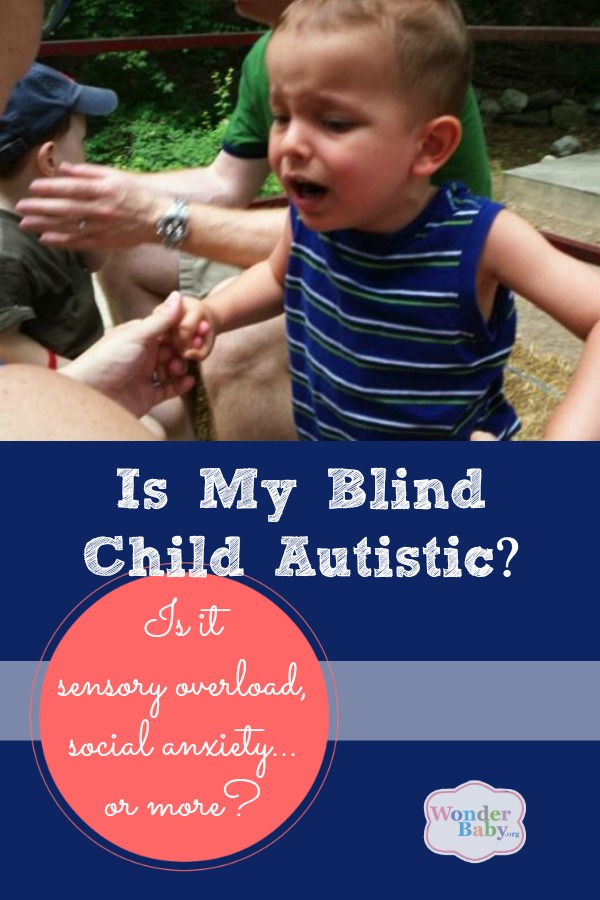 Feb 2, 2017Guest Post
What are your thoughts?
Top 10 iPad & iOS9 Accessibility FeaturesWhat can your blind child learn while baking in the kitchen?

4 years ago Behavior, Growth and Development
3303

How to Potty Train a Stubborn Toddler
15376